A Mother Takes Matters Into Her Own Hands

In the summer of 2012, Samuel started complaining of pain in his left leg and hip. At first we thought that maybe he had just pulled a muscle or pinched a nerve. After a few visits to his pediatrician, he was referred to an orthopedic surgeon in Santa Barbara, CA and to physical therapy.  He had MRIs of his pelvis and legs, bone scans and blood tests – which all showed nothing. The doctors were stumped.  They decided to do an MRI of his entire back and that is when they discovered a tumor along his spine.  We were shocked! We would have never thought he had a 2-½ inch tumor along his spine in his lower back.

Samuel had surgery to remove the tumor at Children’s Hospital of Los Angeles, a participating CERN Center. The laminectomy he had relieved him of the pain he was experiencing. He healed very quickly. Two weeks after his surgery, at his follow-up appointment with his surgeon, Samuel ran down the hall. It was incredible to see his progress. Also, we thought that since he had been through so much that we should take him to see a therapist to help him make sense of the situation.  He was dismissed after a few visits. The therapist told us that he said, “I’m fine.  My parents are having a hard time with this.”  His continued resilience was incredible to us.  As parents, we struggled. This was all so overwhelming and scary. We made a concerted effort to stay positive.

Since they could not remove the entire tumor due to its location, our family relocated to Houston for two months so Samuel could have proton radiation therapy at MD Anderson Cancer Center, a participating CERN Center, to treat the remaining part of the tumor.  Samuel had proton treatments daily for about two months.  We had such a positive experience through such a traumatic time.

During Samuel’s daily proton treatments, he would listen to whatever music he wanted to, which typically included SpongeBob’s song, “The Best Day Ever” – a surreal thing to hear as you watch your child lying in the machine. When he experienced the actual beam, he couldn’t feel anything.  He was awake and had to lie very still.  It was a short treatment to his lower back. Children who are younger and unable to stay still are sedated for this treatment. 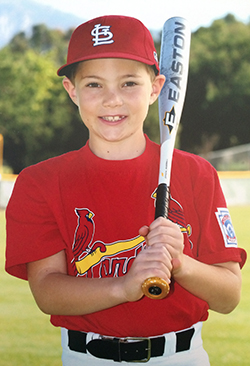 Samuel went to school daily in the hospital even though he was an outpatient.  He was enrolled in Houston Public School through the hospital.  There were a lot of specialized classes such as art, music, and science. The science class would stream a live video from the local aquarium. They went on field trips to the zoo. Also, the wonderful program, Children’s Art Project, would show up in the proton therapy waiting room to raise everyone’s spirits and keep the kids occupied while they waited for their appointments.

Samuel handled the surgery and radiation like a champ. He never complained once about the therapy he was receiving.  He has always remained positive throughout all of this.  He really enjoyed his time spent in Houston and often refers to it as a great family vacation.  He has a great mindset about the challenges he faced.

After we returned from Texas, we had a follow-up MRI and learned his cancer spread up his back, out of the radiation zone. Samuel then had a year of Vinblastine chemotherapy in Santa Barbara.  We had read that many types of chemotherapy medications do not make a difference for ependymoma. However, our doctors in LA felt they had some success with Vinblastine for myxopapillary ependymoma.  We consulted one of our doctors in Houston for a second opinion.  He said, “There is no right or wrong answer, because no one knows. Try the Vinblastine.”  And so, he had the Vinblastine with little to no side effects, thankfully.

We are so grateful that Samuel’s cancer has been stable for almost two years now. We don’t know if the proton radiation helped, whether the Vinblastine helped, or whether the tumor stopped growing for some other reason.

We don’t focus on that.  Life is good.  Samuel gets regular MRIs to monitor the tumor size in order to determine any further course of treatment. He is doing great and is living an active life, just with more doctor appointments than your average kid.  With everything he has been through, he is just as outgoing and active than any other child in his grade. You would never know that he’s been through this experience, as he doesn’t have any residual side effects as of now. We’re beyond grateful.

As concerned parents, we needed even more information about myxopaillary ependymoma. We want to know as much as we can.  Taking matters more into my own hands, I set up a Facebook group for myxopapillary ependymoma.  After more than a year, we are approaching 100 members who are helping each other to understand this disease better on a daily basis.  It’s a supportive group.  To join the group, click here.

Seeing the conversations emerge in the Facebook group really helped me to get a better idea of what to expect with this disease.