A New Perspective on Life 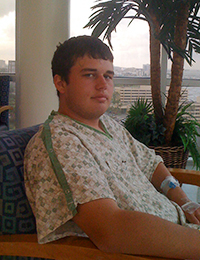 There are a couple of details one might find striking about the course of things leading up to my diagnosis and resection.  A week after my high school graduation, the high school marching band (which I was a part of) took an end-of-year trip to Six Flags. I, being one not to visit Six Flags without riding “The Superman” rollercoaster at least twenty times, attempted to do just that.  Yet I stopped after about the sixth ride because I was beginning to have total visual blackouts.  On the first couple of rides, it only happened at the bottom of loops when all the blood rushed away from my head.  At the time I was chalking all of this up to low blood pressure, and so didn’t feel particularly alarmed.  I finally stopped once it got to the point where I could barely find my way off the ride because the blindness was lingering for minutes.  I remember the surprise some of my doctors had expressed when I told them about all of this retrospectively.  I was informed by my neurosurgeon how amazing it was that the tumor had not ruptured and caused hemorrhaging (internal bleeding).

Changes With My Vision

For the next couple of weeks, I began to notice disruptions in my vision.  It started out with blurred vision and progressed to small “gray area” blind spots until it got to the point where I could hardly see in any detail at all.  It was as if I were staring into a misty fog at all times.

Had I ever had severe headaches that are a common symptom of a brain tumor, I would have not simply written my vision problems off to low blood pressure or too many video game binges.  Thing is, I never had so much as an ounce of pain to suggest that I had a serious neurological condition.

I went to see my general physician about the vision loss and he thought it was optic migraines.  He scheduled an MRI as a precaution, which wasn’t expected to reveal anything.  I remember the silence in the car when driving home with my parents. On the way home, we received a call from the doctor’s office stating that we needed to come see him right away.  It was equally foreboding when we were asked to step into his office to speak with him rather than a typical examination room.  He told us that I was harboring a relatively sizable mass within my left occipital lobe and surgery was scheduled to remove the tumor. 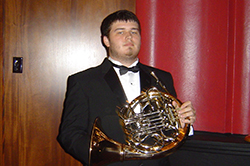 Fast forwarding past the surgery and proton radiation therapy, there was a point at which I believed I would never be able to pursue music in college because I had been left with blind spot in my eyes which made it very difficult to read words or music at a competent speed.  Four years later, my vision is slowly improving and I am about to transfer to the University of North Texas School of Music Composition.  I am currently excelling at my studies on French horn and large form orchestral composition.  Suddenly, my dream of becoming a great composer is becoming a real possibility.

I am grateful to God that through the course of all that has transpired, I have forged a new perspective on life and level of determination, which I may not have ever developed, if I had not been brought to see that none of us are promised a long life.  I am also grateful that God has delivered me into the excellent care of the people at MD Anderson Cancer Center.  They are all a blessing from God, whether or not they realize or even acknowledge it.  All of them, from the radiologists and oncologists to the workers, researchers, and volunteers with organizations like the CERN Foundation and MD Anderson’s Children’s Art Project.

If I should live a long life or be stricken once more with my disease, I will consider my time here to have been all the more full because of the efforts of such people.