Adam Brings Hope to Others 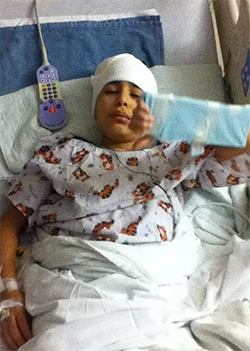 When Adam was nine-years-old, I took him in for an MRI because he was having headaches, projectile vomiting and extensive nosebleeds.  The MRI was done with and without contrast so an IV had to be inserted in his arm. This was the first time Adam ever had an IV and he was terrified. He screamed and cried the whole time. He was so scared that I promised he would never have to get another IV (unfortunately this was the first of so many that I lost count). Within five minutes, the doctor was waiting to deliver me the bad news, “We see something on the brain. I already called your pediatrician and she will be calling you in the next few minutes to let you know which hospital to take him to. Do you have any questions?”  I remember my heart beating a hundred miles a second and in my head thinking,

“Yes, I have a million questions!” but I did not want to scare Adam so I just shook my head, “No.”

When talking to the pediatrician on the phone, that was when I first heard the word “tumor.” My knees went out from under me.  I remember catching myself on my bedroom dresser. She stated that it was a 7cm brain tumor on his right, frontal lobe the size of a tangerine. I wanted to scream and cry, but I had to hold it together for Adam who was in the living room. I had to walk out of my bedroom with a smile on my face.  I told Adam that everything was okay and that we had to go to the hospital so that he wouldn’t have any more headaches or be sick to his stomach. Adam was admitted to the hospital that night and given medication to help with his headaches and vomiting.

Two days later, Adam underwent his first craniotomy which lasted four hours. We were surrounded by family and friends at the hospital. The neurosurgeon came out and said the surgery was a success and that indeed it was a tumor.

Recovery was excruciating. I could hear him screaming and crying across the hall for three hours. He was in so much pain that he told me that he wish he had died during surgery and that he wanted to jump off a bridge at that moment. It was the hardest thing I have EVER heard in my life!  But he never complained after that. The next morning he apologized to me about what he had said the day before. He told me he was actually one of the lucky ones.  That many kids don’t survive surgery or are in worse pain than he was. Even at his lowest moment, my Adam was thinking of others. 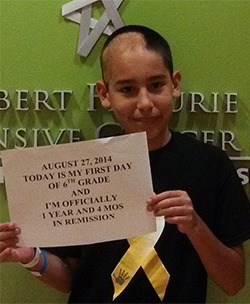 Four days after surgery, the pathology report came in – a grade III ependymoma. CANCER? How could that be? Cancer does not run in my family. I was in shock, but once again, I had to hold it together for Adam and smile pretending everything was okay. The next day, a team of oncologists and a psychologist met with Adam to talk about his diagnosis. When he first heard “tumor” he became scared. When he heard “cancer” he started crying and buried his face into my chest. I held him tight. It just broke my heart! The doctors did a good job explaining things to him and comforting him. “Cancer and tumor – they are just words,” they told him, “We are here to make you better.”

Adam had to have a lumbar puncture (spinal tap) to make sure that the cancer had not spread to his spine, which came back clear. This was another traumatizing and horrific experience for Adam.  He was in so much pain as this was being administered. Adam could not walk straight for three days after this procedure.

In December, I took Adam for a second opinion and there were signs of leftover tumor. On Dec. 18, Adam underwent his second craniotomy.  Even though Adam knew what was to come, knew the excruciating pain he was going to be in after waking up from surgery, he never complained. After surgery, Adam was in a lot of pain, but nothing compared to the first surgery. He only spent two days in the hospital.

He began proton radiation. His doctors told me about a clinical trial they were conducting to see if chemotherapy would have a positive effect. It was experimental and I didn’t know what to do. Should I let them put poison in my son, my baby, my only child? What if it doesn’t work? But what if I say no and the cancer comes back? This was the first time I really felt scared. I had to make a life-and-death decision. It was all on me. After doing my research, I decided to enroll Adam in the clinical trial. He completed 30 sessions of Carboplatin chemotherapy and 33 sessions of proton radiation. He ended treatment on Feb. 25, 2013. 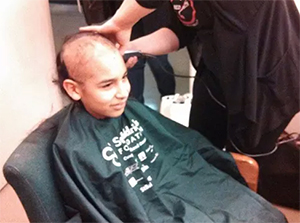 He went to school every day during the treatment and remained a straight-A student. He never got sick. Nobody could believe he was battling cancer as he had no side effects. The only side effect is the loss of hair at the radiation site. As Adam says, “It’s just hair!  So long as the radiation did it’s job, and the tumor never comes back, who cares if the hair never comes back.” As of August 2014, he was officially 16 months in remission with six clear MRI’s post treatment. He is now eleven-years-old and just started 6th grade. He never lost his smile, laughter or sense of humor. He is my same silly child. He often says, “The power of prayer is bigger than cancer. I AM bigger than cancer!”

I hope to bring HOPE to many children and parents who are battling this disease. We successfully got Chicago Mayor Rahm Emanuel to declare April 18 Ependymoma Awareness Day in 2013!

I have been supporting St. Baldrick’s Foundation, whose mission is to conquer childhood cancer, for many years never thinking my own child would be diagnosed with cancer. After my son’s diagnosis, I finally realized exactly how underfunded childhood cancer research is.  My son and I decided that we would do anything and everything in order to help raise funds for childhood cancer research.  On his own, he decided that he would shave his hair on Fox News Chicago to spread the word and bring awareness to the event. He wanted to show other kids that he’s standing with them and knows what they’re going through.