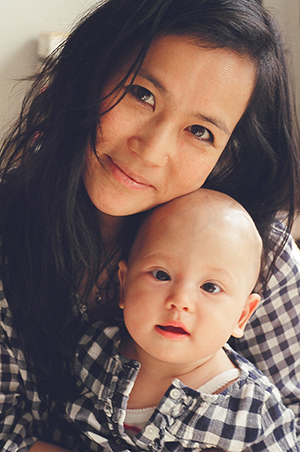 On September 11th 2009, my eight week old daughter, Minty, was released from PICU in Columbia after eleven head surgeries in two weeks. The first craniotomy removed a brain tumor, which turned out to be a very malignant anaplastic ependymoma.

We spent the next seven months putting our baby – literally our baby – through the rigors of a six round high dose chemotherapy protocol called Headstart III, with the final round relying on an autologus stem cell rescue of destroyed bone marrow. The aim of the protocol was great – to avoid radiation in children under the age of ten years old. It was the general understanding that a two month old baby was just too young for radiotherapy, so this was our only option.

Minty sailed through chemo with flying colors, never giving any indication of being sick or in pain, always so full of energy and joy, and I think sometimes she was on a chemo-high.

So when we completed the 5th round, we triumphantly steeled ourselves for the final round in reverse isolation, where Minty’s destroyed immune system would be carefully rescued with her own stem cells. This could take months, and I’d already had the phone line and cable TV turned off at home, ready for the extra long stay in-patient. However, a baseline MRI showed new tumors that had grown on high dose chemotherapy, and Minty was immediately pulled off the protocol in March of 2010.

Four months later, the day after her first birthday, she died.

What I know now, is that few, if any, children have survived Minty’s diagnosis without radiation, though many have also died with it. This past July alone, five children with Minty’s diagnosis died within twenty-three days of each other. I emailed Minty’s oncologist this terrible news, and here is what she wrote back:

Hi Mei Lai, Numbers like these are a harsh reminder that we still have a lot of work to do. However, I do have real hope that we will someday reverse these numbers through the use of techniques and novel treatments which are being developed. I hope you are well. I think of Minty every day. Regards, Dr. G

“While overall childhood cancer survival rates are now almost 80%, ependymoma remains incurable in up to 40% of patients. The tumor is found in 150 to 200 U.S. children annually, making it the third most common pediatric brain tumor. Treatment has changed little in the past forty years and is limited to surgery and radiation.”

It is my hope too, that drugs will be found that can cure this type of rare brain cancer in children too young for radiation. The current therapies are simply not targeted enough, and come with too many damaging, long-term side-effects. These drugs require a huge amount of money to be researched and developed. We discovered first-hand how inexact a science science is, and I implore you to please continue to help with your research dollars, as well as your time and love.