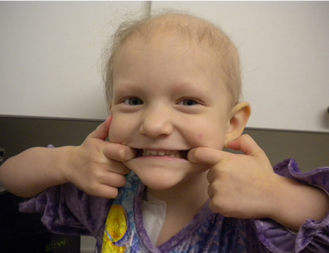 Maisie was a normal, healthy little girl until she was almost three-years-old. In June 2009, Maisie started to vomit, occasionally. Then, she began complaining of headaches. She was only two-years-old, so I never really thought much of it. The turning point was when she started having problems walking. Her right foot would turn inward and she would lie down and cry, saying her leg didn’t work. I thought she just wanted me to carry her, so I was never too concerned.

One evening she was dancing and her foot turned in. She grabbed her head and screamed in pain. I will never forget that gut wrenching feeling that something was wrong, really wrong. I took Maisie to the emergency room the next afternoon. The doctor ordered tests. When she was done with the tests, I could feel the uneasiness in the room. The nurses were moving quickly and they all had such a sad look on their face. The doctor came in and said to me, “I’m sorry to tell you, but you’re daughter has a mass in her brain.” I didn’t have much time to think. They loaded her in a helicopter and she was off to a children’s hospital. Maisie had her first brain surgery three days later.

A couple weeks after surgery, we went to St. Jude’s Children’s Research Hospital where Dr. Amar Gajjar first introduced me to the CERN Foundation. Maisie had four rounds of chemotherapy and took it like a champ. If she got sick, she just cleaned herself up and continued doing whatever she was doing before it happened. After she completed her chemotherapy, she had another brain surgery to remove the remaining 20% of her tumor. Then we moved to Jacksonville, Florida to do proton radiation. She was sedated every single weekday for her radiation treatments. On the weekends, we traveled to the beach or to Georgia to explore the sites. We returned home two months later and did oral chemotherapy. She had her last dose of chemotherapy on her fourth birthday, September 8, 2012. Maisie now has yearly MRI’s at St. Jude. 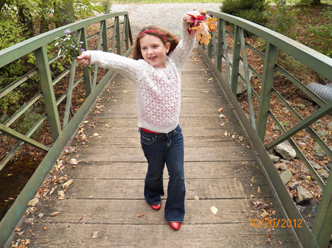 Brave And Full of Life

Maisie came away from all of the treatments virtually normal. She has no learning or cognitive problems. She has a slight weakness in her right leg, but you would never know it by looking at her. She was a driving force for her family, especially me, during her treatment. It brings tears to my eyes now to think about how little she was and how much she went through. There were days at St. Jude that I could have just stayed in bed and cried all day, but Maisie wouldn’t allow it. She got me up and made me take her to the zoo or playrooms. She carried me through her sickness. She made me laugh on days I wanted to cry and made me smile on my worst days. She has no idea how strong she really was and still is to this day. Maisie was so little she didn’t understand that this wasn’t normal.

Maisie is so full of life and loves everything about it. She has a different way of looking at the world than most kids. She often asks if she is special because she had cancer and God gave her a miracle. She instantly feels compassion for any bald person or any disabled child. If she hears of someone that has cancer she immediately says, “they need to get to Judy’s” (Judy’s is what she calls St. Jude).

My Advice to Others

You are your child’s advocate, but don’t forget they are just children. As scary as it is, you must let your child remain a child and have a childhood. Don’t get caught up in the medical aspect and don’t get so stressed out that you can’t function. Also do not believe statistics that you read on the Internet. There are so many new treatments being discovered that you cannot judge 5-year or 10-year survival rates. Don’t lose hope! With the efforts of the CERN Foundation, there is still hope for a cure. I am thrilled at the leaps and bounds in research the foundation has made. 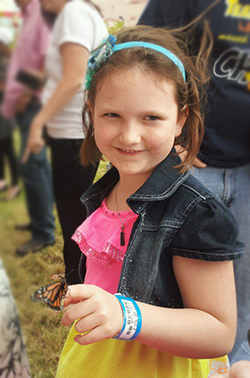 Where are we now?

Maisie is now nine-and-a-half years old! That number seemed so unobtainable when they told us she had cancer. Now my little survivor is in the 3rd grade and she absolutely loves school. She loves making new friends, learning new things and meeting new people. Ever since she was diagnosed, Maisie has not been allowed to participate in her P.E. class at school due to her chiari malformation. It does not cause her any problems but the school is afraid to let her participate in certain physical activities for fear she may aggravate the condition. Therefore, on days she doesn’t get to play in P.E., Maisie gets to read. She is now one of the best readers in her class. She rarely watches T.V. and if she does, it is so she can sing with her new karaoke machine. I think the only thing Maisie likes more than reading and singing is going to visit her grandma and grandpa, where she gets spoiled rotten. She gets to do crafts, play bingo, go shopping, and visit her favorite restaurants.

We recently moved to a new town far from the one she used to live in. What I like the most about this entire move is Maisie is just Maisie. She’s not the little girl that had cancer. People don’t know how hard she fought to be here. They don’t know what an accomplishment it was for her to simply survive and be playing on the playground keeping up with the other kids. The best part is no one knows anything was ever wrong with Maisie until we tell them. She looks, acts, and does everything all the other kids her age get to do. That was what we always hoped for. You can’t tell cancer ever touched her life but once you know then you realize how extraordinary this little girl truly is.