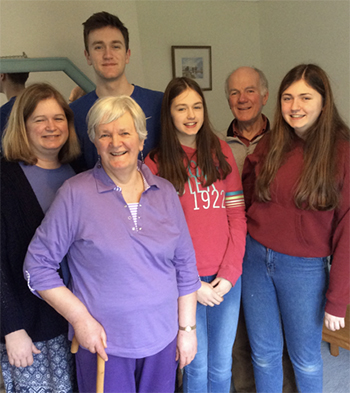 I trained as a teacher, then married in 1970, and had been involved as a volunteer with different national charities and church or community organizations for much of my adult life. As newlyweds, we had spent almost 12 years in Papua New Guinea as missionary teachers and then rural development workers. Then we returned home with our nine-year-old daughter for my husband to complete his training as a priest. We are now both retired with three delightful and engaging teenage grandchildren.

Between June 2011 and September 2013, I grew increasingly and quite erratically unwell, having been consistently healthy throughout my adult life. I began to experience loss of appetite, a sudden collapse of energy and the really gut-wrenching and exhausting vomiting, completely unrelated to anything I might have eaten. Head movements were also tricky, both side to side and up and down. I also walked with a distinct waddle, holding on to anything to keep my balance, describing it once as though I was on the top deck of a cross-channel ferry in a heavy storm.

Over the next two years, I had X-rays for my neck and endless diagnostic tests for my stomach, all reassuring me that everything appeared ‘completely normal’ which I sensed wasn’t true. It wasn’t until our local hospital sent me for MRI scans, that I was finally diagnosed.

Suddenly, after all these months of unknowing, everything happened at once. One evening, I received an unexpected phone call from the hospital, asking me to come in now (at 8 p.m.) for an emergency operation the following morning, as I had hydrocephalus (build-up of fluid in the brain).  I had absolutely no idea about this, and barely time to take it all in, while my husband and a good friend were fortunately on hand to drive me there. As it turned out, the operation itself was deferred by a day, as the consultant needed to see the full MRI scan of both the brain and spine (I now understand better why) and I then had a craniotomy and surgery in the third ventricle to relieve the cerebrospinal fluid pressure in the fourth ventricle as a short term fix for the hydrocephalus.

A few weeks later, after further MRI scans and a reassuring consultation with the sympathetic neurosurgeon who would be performing the major resection of my fourth ventricle and brain stem tumor, I returned to that same hospital. The operation must have taken most of the day, but my overriding impression on coming round from the anesthesia was the startling sharpness and clarity of my thinking, the vivid kaleidoscope of ever-changing colors in my eyes and the extraordinary antics of so many medical staff around my bed. I was told I had a grade II ependymoma and that 95% had been removed, but that the cerebellum was also affected.

It took a while for me to realize that I was seeing everything through distorted double vision.  The first indication that I had poor hand and eye coordination was when I tried to enter letters neatly into the grid of a crossword puzzle, and the letters always seemed to slide to the right and even off the page altogether - very frustrating!  My diary account of this hospital adventure was virtually illegible, though I knew precisely what I wanted to say.

Typing was no better. The wonders of my iPad, with its predictive text and voice recognition software have been a huge help where before I was typing the letter above, below, or beside the one I actually intended.  At least I could eat and swallow and my appetite returned with a vengeance at last.  I was thankful that I was not in pain at all.

It was virtually inevitable that with some of the tumor still remaining, the next sequence was

going to be radiotherapy, though fortunately, in the more local and familiar hospital. I underwent 30 sessions over six weeks, each time with a tightly fitted molded plastic covering fixed over my face. I can’t say it was a pleasant experience, but unfortunately, I reacted violently to the steroids I was required to take. These not only caused severe edema and night wakefulness, but psychotic hallucinations and character changes. At least they could be controlled and were fairly short-term, and once my double vision had stabilized, my new prism lensed glasses greatly helped.

Coping with the Consequences

There is no doubt that the five years since surgery have been the hardest to come to terms with, and I can look back on them now as though I have been on a long journey.

Once I got over the sheer relief that there was actually a name for what was the matter with me, I naively assumed that with the tumor now finally dealt with, I would quite simply pick up where I had left off, and life would continue much as it had.

I have since had to learn that the grieving process for what I have lost and the learning to let go is long and painful. I moved from relief to disbelief that it might take far longer than I imagined and when I was advised to take a break for several months, I was truly shocked. Surely not, there was still so much I wanted to do and even though I was retired, I still had plenty of ongoing commitments. 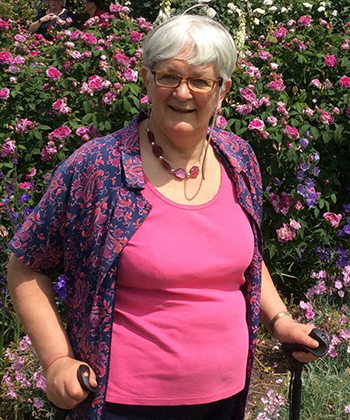 In those early stages the mismatch between my ever active brain and my physical stamina and bodily control was acute. I still appeared healthy and ‘normal’ but I recall how I felt like an Easter egg, all bright and decorated on the outside, but hollow and empty within. My stability was precarious and any head movement needed support.  I felt a mere shadow of my former self.

One day, the simple task of chopping an onion was an eye opener for me, for no matter if I had needed to peel off the papery outer skin, it was still an onion through and through, its true essence hadn’t changed at all.  I came to realize the ‘me’ inside was still there, after all!

I decided to ban the expression ‘I used to' from my thoughts, as the past was well behind me and would never return in the same way again. It was at this stage of my journey that I was probably at my lowest. I was fast becoming a recluse, hesitant to face any kind of jostling for fear of losing my balance and having very limited stamina at all times. My bed and armchair became a refuge, providing precious support for my head and the strain of holding my body erect. It dawned on me that this was just about as good as it would get, and I would simply have to live with it.

Then I simply tipped everything on its head. Instead of counting off all the activities I could no longer feasibly do, I started from a baseline of zero and built on the positives of my present life. I now realize that this is a fairly obvious strategy, but this was something I needed to work out for myself and it helped me enormously.

Over the past few years, little has materially changed. My stability and balance are as precarious as ever. I have very little stamina and tire much too easily, but I rejoice that I am still mentally alert and keep up to date with reading and audiobook listening from the comfort of my easy chair.

At last I have come to appreciate the magic depth of the word ‘enough’, not merely as sufficient for the moment but to represent all that is necessary for my life at present, and I need no longer feel frustrated when I invariably don’t achieve all that my super active brain plans for me to do.

‘Enough is enough’ takes on new meaning when I view it this way, and I can even start to enjoy life more when the constant internal pressure to achieve is lifted from me.  Why have I been so bothered with anxiety about an unknown and unknowable future, when here and now are the crucial key factors to consider at this moment?

And so, my husband and I continue in our own home and have developed a mantra for the short and medium term which is as long as we choose to predict, that ‘between the two of us we will manage’. But my own journey is still evolving, from that earlier passive acceptance to a more positive and realistic appraisal.  It does no harm nowadays to look back on the whole of a pretty fulfilling life and not just on these past few years. It is good to recognize that the future lies not in ourselves but in the burgeoning development of our family and remarkable grandchildren.