Ependymoma Does Not Define Us

In December of 2013, as I was getting out of the shower, I lost my balance and fell hard on my tailbone. The fall knocked the wind out of me. I finally got up and went about my day with some pain, which was expected, from the fall. Over the next couple of weeks, the pain intensified and my fiancé took me to a local emergency room. I was treated for the pain. I was told to follow-up with my primary physician as the CT scan showed what they suspected to be a herniated disc.

A couple of days later, the pain subsided. At the time, I was the mother of an eleven-year-old, enrolled in nursing school and planning my wedding. I figured that I pinched a nerve, causing the pain and that no further follow-up was necessary. Life continued on as usual. 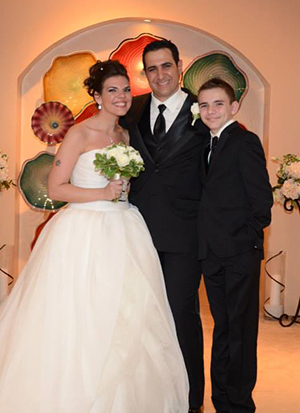 About five weeks after our wedding, I felt a sharp pain as I tried to get out of bed. Again, we didn’t think much of it, figuring that I pulled a muscle or pinched a nerve. A couple of days later, the pain was worse and my husband suggested that we again go to the emergency room. I explained my symptoms to the nurse practitioner and she ordered another CT scan. The scan showed no abnormalities, so they decided that I had a sciatic nerve inflammation, wrote me a prescription for painkillers and sent us home.

The Pain Was Caused By A Tumor

Although we returned to the ER four times the next week, the pain intensified and our questions remained unanswered. My husband decided it was time to call a neurosurgeon. He scheduled an appointment for the following day. By that time, I was not able to do anything because the pain had become crippling. An ambulance had to be called and the neurosurgeon admitted me to the hospital. He ordered an MRI, which showed a tumor between the L2 and L4 vertebrae in my spine. A couple of hours later, as I was wheeled into the operating room to have the tumor removed, I felt a mixture of emotions. I was fearful of what the outcome of the surgery could be, would I be better or even worse? I was afraid I would never walk again and live the life I had. But I was also hopeful. Hopeful that the doctor would be able to remove the whole tumor and I could start living my life again. As I entered the operating room, a sense of calm hit me and I knew that whatever was going to happen – I would be okay.

The surgeon removed the tumor successfully. When my lab results came back, I was given multiple reports as to the type and grade of the tumor until it was finally determined that it was grade II ependymoma and I was told I needed to start radiation therapy immediately. I had some fertility concerns as I wanted more children down the road and began asking questions. As the oncologist spoke to me, she informed me that I needed to focus on the present and not the future. At that point, I knew that I needed to change doctors. This was my current situation but my future is also important.

We decided to get a second opinion, and took my case to MD Anderson Cancer Center in Houston, a participating CERN center. The team at MD Anderson told us that it was not a grade II tumor, but a grade I myxopapillary ependymoma tumor and that radiation therapy would not be necessary since the entire tumor was removed.

I had numerous side effects from surgery. I am a very active person and not being able to walk without pain and a walker was very hard. I was unable to do anything without help…it was a hard pill to swallow. But with the help of my husband, my son and friends – I became stronger. I pushed myself everyday to just go a little further and still continue to. I still have numbness, pain and tingling in my right leg but it’s a small price to pay. 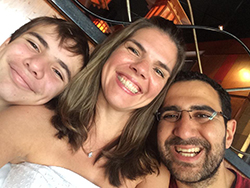 Emotionally, it has been hard. People look at me and think everything is back to normal. It’s a hard condition to explain to others as my symptoms are not something people can see. I took a break from nursing school so I could concentrate on getting well and I will be finishing my last semester soon.

My advice to others is to keep pushing. On the worst days, it will be bleak and dark and you will wonder why you, will this ever get better and you will be tired of fighting. Take your moment to have those feelings and then push through.  Be honest to others around you and let them in. It will be hard but ependymoma does not define us. It is something that plagued us but it should be our goal to help educate others and help people who have our diagnosis.

Why A Second Opinion Is So Important

I have learned so much from my diagnosis. I realized how important it is to get a second opinion on everything…if I hadn’t I would be doing a round of radiation treatments that weren’t necessary.  I was dismissed by nurses and doctors before someone finally caught on to what was really wrong, but I kept pushing to find out what was wrong with me as I know my own body and I knew this wasn’t a pinched nerve.  I realized having a support system of family and friends will help you progress even though you won’t realize it at the time. I realize how lucky I truly am. I may not be able to do everything that I use to do, but someday I will be there again.

When I was first diagnosed, we just googled ependymoma and read message board after message board, which can be scary. We then found the CERN Foundation through MD Anderson. Since then, I have been able to find people who are exactly like me, dealing with the same symptoms and completely understand it all without explaining everything. I am thankful for the CERN Foundation; it has made this much easier.