Every Cloud Has Its Silver Lining 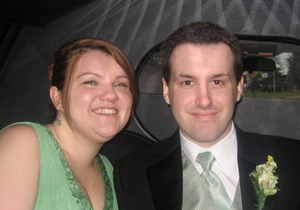 My life was forever changed at 24. I now fully understand the phrase, “Every cloud has its silver lining”.

At 24, I was in the best shape of my life. I was almost finished with my degree in Human Services (social work), I had just been accepted into Saint Louis University Social Work program, with a goal of becoming a marriage and family therapist.

Pain Down My Right Side

On July 5, 2008, I got up in the morning and fell to the floor like a ton of bricks.  My leg had just given out and I had shooting pains going up and down my right side.  My doctor thought it was from my job as a preschool teacher, and I might have hurt my back from lifting the children.  I went through a month of rest and physical therapy, nothing worked.  I was referred to an orthopedic surgeon who ordered an x-ray.

Sitting in the little room with my mom awaiting the x-ray results, it felt surreal. The doctor came back and said there was a spot in my spine in the L1-L3 region and he wanted to order an MRI. The MRI was frightening. They had to inject dye into me so that the tumor would show up.  And it did. There it was, the spot that was causing my body such distress.  The doctor was 99% sure it was an Schwannoma tumor, which could be easily removed.

My surgery was scheduled for August 18, 2008. The surgery took over two hours.  After surgery, the surgeon informed my husband and parents that it was a lot more involved than originally thought. The tumor was so intertwined in my nerves, he didn’t know if he removed all of it.

After surgery I was in so much pain.  I had to lay flat as a board the first 15 hours.  My husband spoon-fed me jell-o.  The next morning they made me get up.  I cried because I was in so much pain, but mostly I cried because I was so very scared.  The next day they taught me how to walk in a walker and I was sent home. The pain was terrible. A few times I threw up from the pain.  Sitting down was so painful.  I felt helpless.  It took me months for me to even look at my incision site in the mirror. 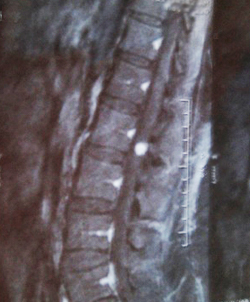 It was September 19, 2008, I was recovering slowly but surely and got a call from my orthopedic surgeon.  He left a message on my voicemail saying that the pathology report was abnormal and that it wasn’t a Schwannoma Tumor and referred me to an Oncologist.  Being a naive 24 year old, I had to look up what an Oncologist actually was.  And there I saw it, the C word…cancer. I called my mother, and told her what he had said. Repeating it made the room start spinning and I felt like I was floating outside of my body.  What was happening?

Inside the office there were many women and men with the battle wounds from Cancer.  We all had the pain in our eyes.  My Oncologist knew how to deliver the blow gently.  He explained what type of tumor it was -  myxopapillary ependymoma. The terms non-aggressive and a quiet cancer was a relief.  He told me that I needed radiation to kill any remainder cancer cells, but it would most definitely harm my reproductive organs so I would lose the ability to have children or my husband and I could consider starting a family now.

Leaving the office, the sun was so bright as my mother and I got in the car.  The inside of the car was so warm, I felt like I was going to get sick.  I had so many thoughts racing through my mind. I was terrified. I researched what this was. I came across The Spinal Cord Association and I didn’t feel alone. There were people out there that knew exactly how I felt and what I was going through.  I reached out and so many hands were there to help me.

We Starting Trying for a Baby

My husband and I decided to start trying for a baby.  We were both scared. We didn’t plan for this – we wanted to wait a few years.  I wanted to finish my degree and work on my career.  My husband had just started building his career.  We plan and God laughs.

It wasn’t until June 2009 that I became pregnant. The beginning of July I had lost the baby.  I sat on our staircase and cried. I cried so hard, I cried for the baby, I cried for my husband, I was in disbelief. Why was it so hard? Why did things have to end up this way? The pain is indescribable when you lose a baby.  The desperation of wanting a baby is torture, month after month of hoping, praying, pleading, and begging – it consumes you. 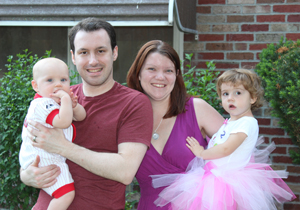 In August, my husband and I decided to do the heavy-duty fertility drugs and then do an IUI (Intrauterine insemination).  My dad paid for all the drugs and the treatments. This had to work, it just had to.

In the morning of September 3rd, my husband, a bottle of his sperm, and I walked into the doctors office. We went in and I had the procedure done.  In two hours, I was at home on bed rest.

September 19, 2009, exactly a year from being told I had cancer, I drove to the closest store and bought five pregnancy tests.  All tests were positive. I fell to the floor. I thanked God.  Within the hour I was giving blood to have the numbers checked.  My numbers were high, very high. It was a healthy pregnancy.

We went in when I was about three weeks pregnant and there it was, the baby’s heart beating away. My baby was here!  Then I heard the prettiest sound ever – the heartbeat.  It is the one memory that I will never forget.

The pregnancy wasn’t an easy one.  I had gestational diabetes, my back was not cooperating, but I didn’t care – I had my baby.  I would have walked through fire everyday for this baby.

I had Melanie Sharon in May of 2010.  She was healthy and such a good girl.  I had pain, but I was so busy with our new baby that it just faded into the background.  I remember being so excited to wake up to see her.  She was my blessing in disguise. The whole entire family fell head over heels in love with her.  We often say that we don’t know what we did before her.

I found out on my birthday in 2010 that I was pregnant again! We were in disbelief. This pregnancy was also hard on my body.  My back was in terrible shape.  In August 2011 our son, Quinn, was born.  He was perfect. We didn’t realize how much we needed him.  Our family wasn’t complete until he came into our lives.

I Started Writing a Book

It wasn’t until Melanie was two and a half and Quinn was a little over a year old that I wanted to start writing a book on my experiences the past five years. I have found strength in writing, and hearing others unique stories on these rare cancers on the CERN Foundation’s website. 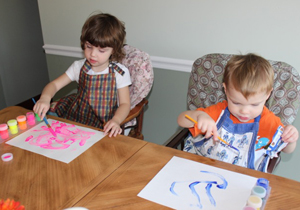 CERN has given me hope that the medical community is working to help others. There is so much support for breast cancer that sometimes you wonder who is out there helping cure brain and spinal cancer.  When I was first diagnosed there wasn’t much on the internet about ependymoma. Now, it is so wonderful to see CERN and Facebook pages where we can all connect and support one another.

My Life is Forever Changed

The last five years have been a whirlwind of sadness and happiness.  I am still grieving, and that’s okay.  I had a lot taken away from me, but I was given so much more. My body is not the same and probably will never be what it was before the cancer.  I have severe nerve damage, which causes pain to radiate down my right leg.  I have degenerative disc disease, Osteoarthritis, pinched nerves, which means my back is always giving me trouble.  I have learned how to cope with it all.  I have a wonderful pain management doctor who is compassionate and understands what happened.

My life has been forever changed because of spinal cancer. If I could change what happened, I wouldn’t. We have dealt with so many tragedies in the first five years of our marriage that we can deal with anything that life brings us.  My whole outlook on life has changed and I am a fighter.  It has made our entire family stronger and we are thankful for what we have.