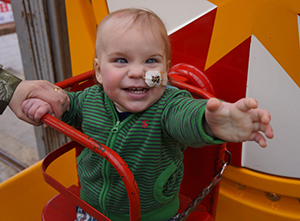 Imagine… Imagine being told your child is seriously ill.

Imagine crying until you think there’s nothing left.

Imagine feeling like you’ve been punched in the stomach and wandering the corridors, as if your life was on pause for days on end, not able to comprehend what is happening.

Imagine signing a consent form knowing that death is an option.

Imagine having to watch as your once active child isn’t even able to open their eyes for a week.

Imagine the pain of having to leave your baby in the care of strangers and not be able to sleep by their side.

Imagine standing by as your baby’s body is pumped full of poison.

Imagine holding your baby while someone holds a mask over their face as they struggle in fright.

Imagine holding your baby countless times as someone sticks needles in them while they scream.

Imagine being told the percentage chance that your child might survive or leave you.

Imagine holding back the tears when your other child is carried away from you screaming “Mummy” not understanding why you won’t come home.

Imagine watching as within two days your child loses all their hair.

Imagine losing all your independence and identity and just becoming someone’s Mummy.

Imagine not being able to leave the house for fear of infection.

Imagine not being to able to make any plans apart from hospital visits.

Imagine being stuck in isolation and not see anything but four walls for days on end.

Imagine having to learn a whole new vocabulary of words.

Imagine good friends being too uncomfortable to see you or speak to you anymore. 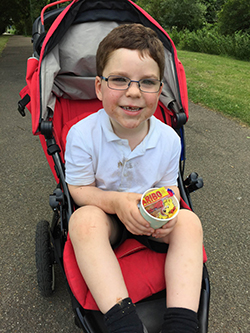 Imagine perfect strangers passing comment about your son. But with the emptiness…

Imagine the kindness of strangers who don’t know you.

Imagine the incredible support from people you’ve never met but know how it feels.

Imagine how special each cuddle is that you feel the need to memorize it.

Imagine the magic of each smile knowing that this smile was lost for weeks and now it’s back.

Imagine how fragile and precious life feels. September is Childhood Cancer Awareness Month. If I hadn’t told you, would you have known? It’s swept under the carpet as a taboo subject.

Imagine if it couldn’t be taboo in your world, because it was your world…

Imagine if I had known the symptoms.

Imagine if all general practitioners knew the symptoms.

Imagine if you felt you had the power to help others, not be in the same position…

Don’t pity, don’t sympathize, just spread awareness and just imagine because it could be you… September is Childhood Cancer Awareness Month.