As most of us would, I avoided the word cancer at all cost. I thought if I didn’t think about it or say it, it would not happen to my child. I wanted the best for her. I knew as her mom she would never personally be touched by cancer. Her body was off limits.

Little did I know that her body had the cancer already there, waiting for the right time to grow. 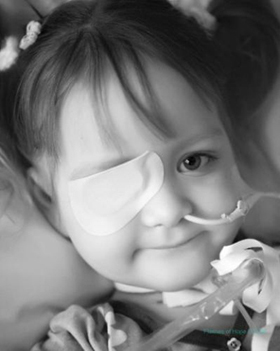 On January 5, 2008, we heard the words that changed our lives forever, “there is a very large mass on her brain.” We were transported to a local hospital for surgery that would take place less than 48 hours later.

How do you tell a 5-year-old that she needs surgery? Much less explain that she has a brain tumor or cancer? I was allowed to go to the pre-op area with Ivory, but was not allowed to stay with Ivory as she went to sleep to have her pre-surgery MRI and then surgery. I was pushed out and the last words I heard her say were “please don’t cut on me.” It was 14 hours later that I was able to see my daughter again. All I wanted to do was hold her and hug her, but I was not allowed to pick her up.

Surgery and Treatment Side Effects

We had many things go wrong after surgery. Five days after surgery we found out that her bowel perforated. She was rushed to the pediatric intensive care unit and then to surgery. That would be the first of two perforated bowels. With the second one she went into a coma for weeks. While in the coma she had multi-organ failure. She had tubes coming out of her body everywhere. They told us the odds were against her to live and it was a matter of time. We cried and prayed. I watched my child suffer so much and there was nothing I could do other than pray. After weeks in the coma, Ivory woke up with a trachea tube. We were told she would have it for the rest of her life. They also said that she would never walk or eat by mouth again.

Little did they know, Ivory had other plans. She did walk again and do everything they said she would never do again. Ivory suffered so greatly, though. We spent months at the hospital recovering.

Four-and-a-half years later, she still suffers from the side effects of the surgery and treatment. One of the side effects is that she is aging faster than others her age. We do shots to slow this down, but she is a head taller than others her age. She sees many specialists and takes more medicine every day to stay as healthy as she can. She has pain on a daily basis, but she deals with it with grace and faith. 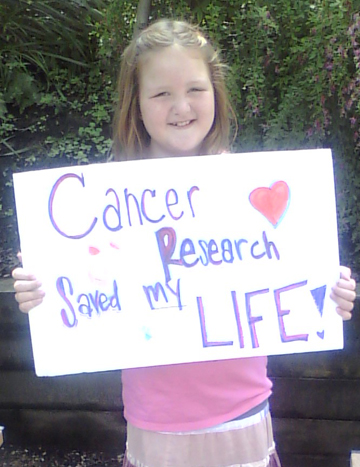 I have joined support groups for families, like mine, who have lived or are living with cancer and its effects; they have helped me immensely. We watch our kids suffer all too often. We watch our children pass before our eyes. We, as parents, are not supposed to outlive our children. They are supposed to grow old and become moms and dads and even grandparents.

One of my cancer friends posted this on her Facebook status, “I will never understand why our kids have to go through hell and then eventually die . . . I won’t ever understand and certainly won’t ever accept it! I won’t move on, get past it, or heal with time . . . So save your breath, your words and your well-meaning advice.”

All too often people are fast to say, “It’s time to move on; it’s been such and such amount of time.” This is being said to those who have kids still fighting or those who lost their earthly angel. I, myself, have had this said to me more than once about Ivory. A family member said to me once, “If you keep bringing it up, she will have to keep reliving it.” So what do you do? Leave your child at home when it’s clinic time? If someone you know has a child or loved one that has cancer or has passed from cancer, hug them, listen to them, and support them. They need you as much as we need a cure.

I wish we had a cure, but one thing cancer has done is bring me very close to some very wonderful families. All too often I have watched these families lose their child to cancer. The family has watched their child suffer and decline.

When I meet a family, whether with a newly diagnosed child, husband, wife or loved one, the first thing I do is hug them and tell them to never give up hope. As long as we have hope, there is a chance for a cure. Then I tell them, “If you are told there is no hope, go to another doctor and seek help.” I tell them to join support groups online and in person because they are a great lifeline, not only for those fighting, but the caregivers who need just as much hope and support.

“God has a plan for each of us, it is our place to go with the flow to find what that plan is.” - Ivory, age 5