Kimberlee is a Fighter

In 2004, I was 15-years-old in 9th grade. I had a great boyfriend and I was doing well in my classes. Something did not feel quite right. I began having headaches almost everyday and when I would stand up I would get a lot of pressure in my head. Blaming the pain on hormones, life went on but by the second semester of 9th grade, things began to get worse. I started blacking out in my classes. In gym class, if I tried to do one sit up, I would get dizzy and throw up causing me to lose my appetite. So if I did throw up, I was gagging because there was nothing in my stomach. I was sent home every day for a week because of illness. My mom was concerned and made an appointment for me to see our family doctor. 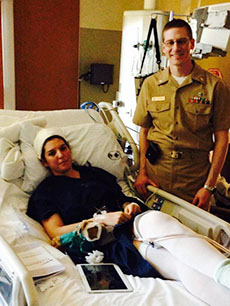 The doctor did blood tests, balance tests, neurological tests, strength tests, but he was still unsure the cause. So he referred me to a neurologist the following day. When I went into the room, I was nervous. She did a balance and movement test but thought I had severe migraines. She said to come back in three months for a follow up. We thought we had our answer but we were terribly wrong. A week went by and I was still being sent home and the school nurse suggested to my mom that I get an MRI and scheduled one that evening. They scanned my head, neck, upper lumbar, and lower lumbar. I remember crying in pain because I had to lie straight on a hard table and not move for four hours. I was also crying because I was so scared. The technicians said the scan would be sent to my doctor. The following morning we got the call from my doctor asking us if we could come in.

The scans revealed a large mass. When we got to the doctors office, we were pulled into a separate room so the other patients couldn’t hear my crying and screaming. I just couldn’t believe I had something growing in my head and I was scared I was going to die. We were referred to one of the best neurosurgeons in Spartanburg, South Carolina and twenty minutes later, we arrived. He showed us the MRI scans and showed us where the tumor was located and explained how the surgery would go. He explained that if I had waited another three months for my follow-up appointment, they probably wouldn’t have been able to operate. God was looking out for me. My procedure was scheduled for the following week on May 19. I was so nervous. When we got to the pre-op room, I was laying there, holding my stuffed animal tiger and tears streaming down my face. The anesthesiologist came in and put me under. The last thing I remembered was closing my eyes and going to sleep. Six hours later, I am out of surgery. 99.9% of the tumor was removed. The doctor said I did not have to have any radiation. The only follow-up was an MRI every year for five years and then one MRI every five years.

I had a lot of physical and mental problems following my surgery. My left arm clung to my chest and my left leg would drag and would have trouble walking. Everything on the left side of my body was weak and had no feeling. Through physical therapy, I was able to walk normal again and on my own. I taught myself how to ride a bike again and how to run. The one thing I couldn’t recover from was depression. The first week after the surgery, I would wake up and cry and call for my sister and tell her I just wanted to die. I was having posttraumatic stress disorder. She was my rock. She would calm me down and talk to me. I never wanted to be on meds, so I just dealt with my depression and anxiety myself. After about a year, things finally calmed down. My depression was gone and my anxiety was minimal. For once since my surgery, I actually felt normal, but I always remembered that I did have a tumor and it could come back.

Every day I would wake up and think, is today the day the tumor will come back? Years passed and I graduated high school, started college, got married, and moved across the world to Okinawa, Japan, where my husband was stationed in the Air Force. One day, I felt like I wasn’t here and having an out of body experience. Psychologists call it depersonalization. My anxiety was so severe, I would cry for comfort and relief. Doctors gave me medication that I relied on. 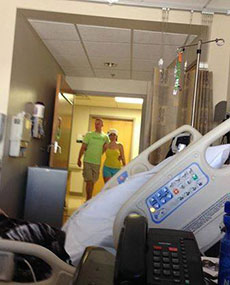 A MRI Revealed the Unthinkable

In January 2014, my scheduled MRI checkup was coming up. I cry through almost every MRI. It’s scary. My family doctor wanted me to see a neurosurgeon to look at my films because she was not able to tell what was post-op. I was not worried because I figured my scans didn’t look normal because I did have surgery in the past. On February 14, when we got in the exam room, my anxiety was low. Then my doctor came in said that I had a recurrence. My mind went blank and while she was talking, I couldn’t concentrate. I couldn’t believe that I would have to go through surgery again. To make matters worse, they couldn’t do the surgery on the island where I currently live. I would have to go to the states to a large military hospital. Within a week, we had plane tickets in hand and were flying back to the states. I couldn’t help but think of my previous surgery and wondered if it would be the same. When my husband and I arrived to Maryland, we went to the hospital for my appointment. I was not nervous at the hospital. My neurosurgeon explained the surgery and I felt safe in his hands.

The morning of April 9, I was laying in the bed in the pre-op room with my husband and of course, tears were streaming down my face. I still remember being rolled into the operating room and the nurses were making jokes and making me laugh so I wouldn’t be scared. The explained how I would be positioned and what they were going to do. I don’t remember falling asleep. I just remember them talking and then waking up. When I woke up and moved my head, I was in the most agonizing pain. They kept giving me pain medicine but it just wasn’t enough because of the pressure in my head. Once the pain was managed, they tested my strength and everything was fine. The first day, I tried to sleep but the pain kept me awake. By the second day, I was walking around and able to walk to the bathroom, sit down, stand up and walk back to my bed. I was so proud of myself. Over the next few days, it was my goal to prove just how strong I was. I took walks down the halls, continued to use the bathroom on my own, and I even showered myself on the fourth day. I couldn’t turn my head at all because my muscles were stiff, but everything else worked fine. I couldn’t believe that physically I was normal.

Mentally though, I was breaking down crying. Every little thing was getting to me. On the fifth day, they discharged me from the hospital and I spent the next two weeks recovering in the hotel room. I still got lightheaded and dizzy when I would stand up or if I walked too much, but it got better each day. On my follow-up visit, the doctor said that he recommended radiation therapy. I told him that I just don’t feel comfortable with it. There are benefits as well as risks involved. I was doing so well that I didn’t want to mess anything up. I told him that I would get an MRI every three months and if there were the slightest growth at all, I would try radiation if the tumor were small enough. If it was not small enough, then I will go through my third surgery, followed by radiation. Third time’s a charm. He understood my decision and signed off on me to fly back to Okinawa. Although I still couldn’t turn my head, I was able to fly back. It was a long flight and I got restless and couldn’t sit still but I was glad to be going back home. For the next week and a half, I recovered at home and regained strength in my neck and was now able to move my neck. 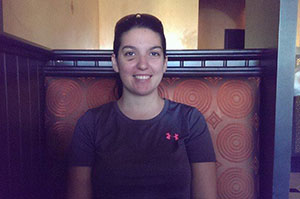 I Am a Fighter

Then, I got a call to start work at the veterinary clinic. I let them know about my surgery and told them I wasn’t going to push myself. Today, I’m comfortable working 35 hours a week. I don’t get headaches, I can stand for long periods of time, I still can’t turn my head but I consider myself lucky that I am able to work again and to just physically be normal. The back of my head is still completely numb. The doctors say it’s going to take time to get better. It could take weeks to years to recover, or it could just always be numb. Having these tumors has completely changed my life. I try to educate as many people as I can about this cancer because it could happen to anyone at any age. I feel like God has helped me through this and to beat it, to help those who have tumors and to educate those who are naive about it. At times I feel guilty that I am doing so well, as other people can’t walk or even speak.

I often think to myself, why did I get better? I believe the answer is to give others hope that you can beat this. I’m blessed I have ependymoma. I can be a role model. I can comfort the wounded. I can be there for the lost. Even if it takes my life, I will know that I have helped others. I gave them hope for a new future. I am a fighter. I am a survivor. I will keep fighting till my dying day.