Linda Shares Her Experiences To Help Others 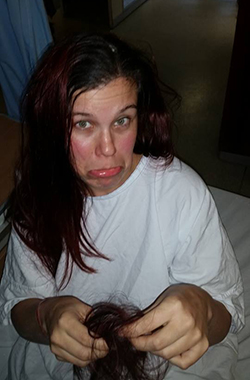 When I was nineteen, I was in labor with my second son. When my midwives asked me to push, my left arm went numb and flopped to the side of my body. I thought the cause was the epidural. Later that night, as I was eating my dinner, the same thing happened and I dropped my knife on the floor. These episodes became more frequent and with two young sons, I went to a doctor for answers. She referred me to the neurosurgery department. I had a spinal MRI, which turned out to be normal. I began having frequent seizures so they decided to do another MRI, this time on the brain. They found a tumor in the right parietal lobe.

I was put on anticonvulsants and scheduled for a brain biopsy. In 2000, I was diagnosed with a grade III ependymoma. Doctors decided to wait and watch and by the following year, but by the beginning of 2001, my seizures were becoming out of control. My whole arm would shake above my head in the air for over ten minutes at a time.

Craniotomy to Remove the Tumor

In April 2001, I had my first craniotomy to remove the tumor. I was told there was a risk of permanent paralysis in my left arm. When I woke up, my whole arm was paralyzed and I was told that they could not remove the whole tumor due to its close proximity to my sensory system (hearing, touch, smell, balance/movement). Over time, the feeling in my arm started to return and the only permanent disability was weakness in my pinky and ring finger on my left hand. This was a little bit of an issue for me as I am left-handed but I learned to deal with it and got back up on my feet. 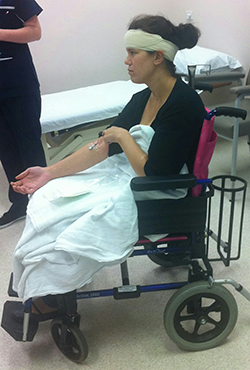 This experience has helped me discover what I wanted to be in life. In 2003, I began to study nursing to become a midwife! One month into school, a follow-up MRI showed local recurrence and my best course of treatment would be six weeks of radiotherapy so I deferred my studies for a year. Stereotactic radiotherapy uses a metal frame screwed into the skull to precisely deliver radiation to the tumor. The main side effects were hair loss and lack of energy, but I coped. In 2004, I continued nursing school.

For the next eight years, my scans appeared tumor free and I was symptom free. I was off my anti-seizure medications and happily working as a registered midwife. In 2011, after a routine MRI, they found another local recurrence. Due to the positive outcome of the previous radiotherapy, he recommended another session of stereotactic radiotherapy. I did not want to go through it all again and the memories of the head frame being attached all came flooding back. I was scared but I knew that the radiotherapy had worked in the past – it was definitely going work again. Unfortunately, five months after treatment, my sons woke as I was having a grand mal seizure in my sleep. This was a very scary moment for them, but due to previous discussions with them, they knew exactly what to do. I was admitted to the hospital and prescribed anti-seizure medication. I was symptom free for a little while. 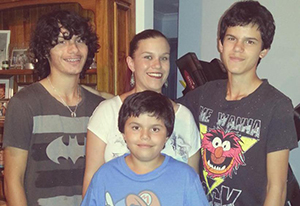 I had a couple of follow-up MRI’s, but by early 2013, I was told that the tumor had regrown again in the same spot and I was sent to the neurosurgeons once again. Due to the location and small size of the tumor, the surgeons wanted to wait until the tumor was larger. I asked my radiation oncologist for further stereotactic to which he obliged, but unfortunately, it did not work and I began having focal seizures again.

As I write this it is 2014. I am sitting in a hospital room waiting to have another craniotomy tomorrow to remove my ependymoma. The last few weeks have been very stressful for me and the waiting has had a very negative effect on my emotional well-being. I have been told that there is a risk of permanent weakness in my left arm, which will affect my ability to work as a midwife. I am trying to stay positive for my children, although this is very hard. Now that I am in hospital, I am feeling very determined to get through this again. 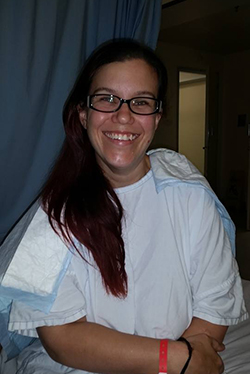 I believe it helps to write down my thoughts and to find people in similar circumstances. This gives me the opportunity to debrief and vent my frustrations. I have found that reading about other people’s circumstances through the CERN Foundation website has been very comforting. Talking to people who have been through what I have has helped me a lot. I recommend researching and finding as much information as possible as I believe knowledge is power. I would like to find someone who has a similar story to mine, as I am yet to come across anyone with ependymoma in the right parietal lobe with focal seizures.

It has been just over four months since my second operation and I feel almost back to normal. My hand was indeed affected by the surgery and I suffer from weakness; however, I have managed to overcome that with help from an occupational therapist. I couldn’t even hold a pen to write or hold a knife to cut my food initially. I am now back at work, which is such a great feeling – I feel like I have purpose again! After this surgery, if I could add any more advice to others it would be to take each day at a time. I became depressed and found help through the Cancer Council in Australia and am currently seeing a psychologist who specializes in cancer. I have realized that my mental well-being is one of the most important things to my health. I am learning how to develop positive emotions and on the road to being a happy person.