Living Each Day to the Fullest 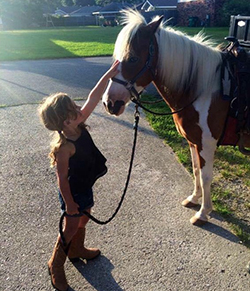 In January 2016, my four-year-old daughter, Sophia, fell on the playground at school. When she got home that day, I noticed she was limping a little, not bearing weight on her left leg and hunching over a bit. I figured I would keep her home from school a few days and just watch it closely to see if it improved. That same night, it all went downhill. She woke up in the middle of the night screaming and crying in pain. She said her stomach and leg hurt and she wouldn’t lay on her back. Her dad and I comforted her and held her, but this cry was like nothing I’ve heard before from her. Two days later, she was still waking up in the night with severe pain, so we brought her to the emergency room. We told the doctor about her symptoms and how she would wake up in extreme pain. He said it was most likely from the accident and she probably pulled something in her back, a musculoskeletal strain. We went home still feeling like something wasn’t adding up. Two days later after her pain increased, we were back in the emergency room. This time at a different hospital. An x-ray was ordered, but they saw nothing present and thought her abdominal pain was most likely a stomach ache or gas – so we were sent home again. Feeling frustrated, I made an appointment with her pediatrician. He couldn’t determine why she was waking up at night and why she was having the symptoms she was. He sent us to an orthopedic doctor who ordered an x-ray. The results from the x-ray showed that her spinal cord was expanded and he sent her for an MRI. 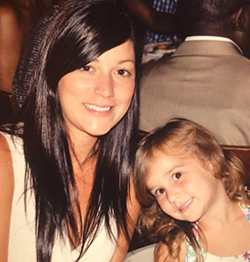 The next day, I got a phone call from the doctor. He said there was a tumor in her spinal cord with some bleeding around it. The accident had caused bleeding around the tumor, which was likely the cause of her severe pain. I never expected this and was in complete shock. We were sent to a neurosurgeon the next day. He sat us down and showed us the imaging from her tests. All we could do was cry. There it was a nodular shaped tumor in my daughter’s spine. He said it was most likely a tumor called an ependymoma and we would know more after it was removed and a biopsy was done. Of course I began Googling about ependymoma tumors and was a nervous wreck thinking my child could have cancer. Her surgery was schedule for the next week. So for another week, I had to see my child in horrible pain, not being able to help her and the pain medicine only helped a little. My biggest fears for Sophia were paralysis as this is such a delicate area to perform surgery on. The doctor told us about the potential risks involved with this surgery which confirmed my worst fear. The risks included loss of control over bowels and a chance of being paralyzed.

The surgery was seven hours long. When she came out, she tried to sit up. We were so happy to see that she could move. We later checked her little toes to see if she could move them and she did! He said he performed a laminectomy, which required opening her spine like a hinge, removing the tumor, then closing it back with some screws. He was able to remove all of the tumor. He said she would likely have trouble with her left leg because the tumor was pushing on some nerves and had caused some nerve damage. 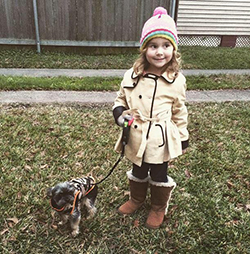 The results showed it was a grade I intramedullary ependymoma, which is a slow growing tumor, not likely to recur. After a stay in the ICU and pediatric floor, she went onto a hospital for over a month to receive inpatient rehabilitation and physical therapy. She worked very hard and gained some control of her left leg. She has proprioception in the left leg and hemiparesis (weakness of the entire left side of the body). We are hoping for a full recovery, but only time will tell if the nerve damage is permanent or not.

This experience has taught me to never take life for granted and that everything can change quickly – so live each day to the fullest and be thankful. Sophia has been impacted tremendously by this experience. It has brought out a fight in her to work hard to regain her strength. It has also been tough for her to adjust to her new body – she can’t do everything she could before. She is such a tough and spirited little girl who has taught me to cherish each day. I’m glad I found the CERN Foundation and to have this great resource during Sophia’s recovery and being able to read inspiring stories from others who suffer from ependymoma tumors.