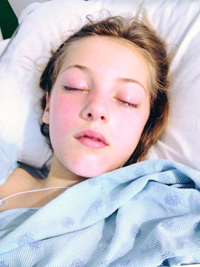 In November 2012, my eleven-year-old daughter, Morissa, told me her tailbone was hurting. I asked if she had fallen and did not notice any bruising or scrapes. I gave her some Tylenol and scheduled an appointment with the family doctor. He said it was most likely just “growing pains”. For months she had occasional dull pain in her lower back. In April 2013, she came to me again, this time crying saying, “Mommy, my tailbone really hurts.” We scheduled another appointment and they performed a balance and coordination test. She did not do well performing the test and could not bend forward to touch her toes. The doctor sent us to get X-rays and diagnostics for urinalysis. The urinalysis showed high protein amounts, but since she was in a lot of pain when she would sit, lie down, and walk, they determined standing too much caused the high levels. The nurse practitioner said there was no reason she should be having the pain she was in that she could see. Then she suggested that Morissa’s pain was psychological (if only she could see her in the excruciating pain that I witnessed). She sent us home, advising her to take Motrin, with the hopes that it would get better with time. 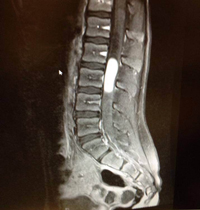 In a matter of days, the pain got increasingly worse in her lower back and down her right leg. With no other option, I took her to the ER where they performed another urinalysis and gave her Tylenol. Since the Tylenol seemed to ease the pain, they sent us home. The Tylenol knocked her out and I was relieved since she had very little sleep all week. The next week, I scheduled an appointment to see a new doctor, her pediatrician. She listened to Morissa’s concerns and our frustrations. She lifted her shirt up and saw that Morissa had an abnormal curvature in her lower spine and thought it could either be Lordosis or a slipped disc. Finally! After a week and half of horrible pain, we were finally going to get a MRI. The first available appointment at the diagnostic center was a week away.  ANOTHER WEEK! After the weekend passed, I decided we could not wait and I drove her to the local hospital in our little town on Monday morning. As we checked in, the nurse told me that they did not do MRI’s in the hospital. I calmly told her that we were not leaving without them telling me what was wrong with my daughter. The pain was so bad now, that she was unable to walk, and having uncontrollable back spasms. She was shivering from the pain! There was no way that I was leaving there without a diagnosis. They went ahead and put her in a room, gave her liquid medication, and sent her back for a MRI. Several hours later, a nurse comes into our room, and told us that the MRI showed a mass. She told us that because it was a small hospital, not equipped to handle such delicate and complicated cases, that my daughter would be transported to a bigger and better hospital downtown Houston. 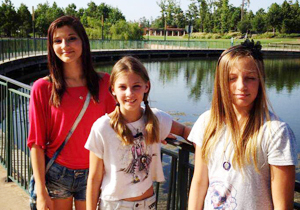 Morissa was sleeping when the nurse told me this information. My head was spinning. A tumor? She did use the words “mass” and “tumor”! I broke down. I called my family for support and my mom was there in less than five minutes.  The ambulance transported us to a children’s hospital and the ride was bumpy and painful for my little girl who had a mass in her spinal canal! Getting to the next hospital was just the beginning of our journey. Knowing that we had one of the top pediatric neurosurgeon’s in the U.S. operating on my daughter was of great comfort. He was very nice and explained things in a way that Morissa and I could understand. She was glad to hear the pain would be gone! He thought the tumor was a myxopapillary ependymoma (which was later confirmed) and there was little information available for this rare tumor. The night before her surgery was scheduled, she lost control of everything from the waist down. That was a scary moment for her… and for us! I had to be the calm mommy. The tumor she had was very large according to the doctor, pressing on all the nerves in the lumbar region. The possible risks of surgery were scary – it was a minute-to-minute and day-to-day process. She had a gross total resection and her follow-up MRI’s were clear. 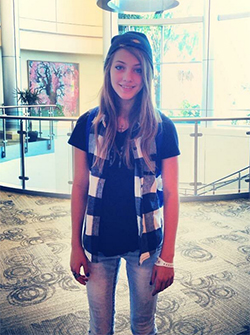 Where are we now?

In August 2014, the neurosurgeon saw a spot of concern. We didn’t know, and no one told us, until May 4, 2015 that it had grown! They had only been doing lumbar MRI’s and finally decided to get a full spine and brain MRI. The tumor in the lumbar showed growth, and they also found more tumors in thoracic spine. So they immediately made plans for treatment of those, at MD Anderson Cancer Center Children’s Hospital. We met with her neuro-oncologist, Dr. Khatua and started proton beam radiation.

She finished treatment December 23, 2015. The two follow-up MRI’s since then have shown stable tumors. She goes back in mid July for her next MRI. She still has pains in her back, but we are hoping that those will alleviate over time. She’s able to ride her bike and swim – so that’s great. It helps with her stress and anxiety.