Our son, Shawn, was diagnosed with an ependymoma brain tumor at 16-months-old. He had been sleepless and irritable and after four different doctor visits in one month, we finally received a diagnosis. Shawn was rushed to SickKids Hospital in Toronto, he had surgery the next day. The surgeon removed 99% of the golf ball-sized tumor and relieved the pressure of fluid that had built up in his brain. A few weeks later, once Shawn was out of intensive care, he started 33 rounds of radiation. We lived a few hours away from the hospital, so I stayed with Shawn and my husband stayed at home with our three-year-old daughter. 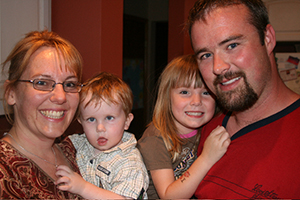 When a child is diagnosed with cancer it affects so many aspects of a family. Not only were we devastated that Shawn has such a serious illness but we were hit with what was called our new ‘normal’. Living apart for days and weeks on end. Our daughter, being only three, did not quite understanding what was going on. The stress on our finances as I could no longer work. It is a whirlwind of change, worry and upheaval.

After four months, we were able to move back home and live all together as a family. Shawn was doing well and learned to walk and talk once again. However, during a routine MRI, we learned that Shawn had what’s called a goose neck. A small piece of vertebrae had been removed during the initial surgery and now his body was not compensating for its loss. He underwent a bone graft where bone from his hip was harvested and then grafted to his spine. He wore a body cast for four months while his body healed. You would think that he would have hated the cast but, like all these kids faced with such adversity, he smiled through it and figured out ways to get around anyway!

The cast was removed in January and Shawn learned to run around again and was a happy little guy once again. We participated in a fundraising event called Meagan’s Walk, where thousands of people encircle SickKids hospital in a gigantic human hug. It was an amazing experience to be part of that day alongside families who had similar experiences to ours.

We were on our way to being a ‘normal’ family again, or so we thought.

In May, almost a year since his initial diagnosis, we learned that Shawn’s tumor had come back and, in fact, he had two more down his spine. We tried two months of experimental chemo but the tumors were growing at an alarming rate. There was nothing that could be done. We enjoyed the summer as much as we could and then watched as Shawn lost one ability after the next and eventually passed away on October 1, 2007, just before his third birthday. 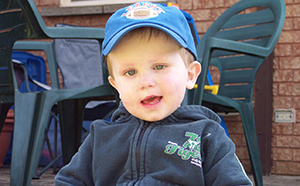 A Sippy Cup of Chemo

Since then, I have written a book called A Sippy Cup of Chemo. I wanted to not only share our story so there was a little piece of Shawn out there in the world but also wanted to help other families travelling down the same path. During his 18-month battle, I found it extremely helpful in reading about research as well as other families going through the same journey. I would often confer with other parents on a group chat site called EpendyKids, a site dedicated to parents of children with an ependymoma.

Going through a devastating illness with your child and then grieving through the loss of them is not something that many can relate to. I wanted to provide an insight into our journey for other bereaved parents who needed to know that they are not alone.

To purchase, A Sippy Cup of Chemo, click here.