When my son, Sebastian, was just 7-years-old, he began complaining of headaches and he began vomiting every morning. I took him to his primary doctor and she thought it was probably a sinus infection and he began a round of antibiotics that seemed to relieve the pain. A week later, the headaches and vomiting began again and my instincts told me to drive him straight to the hospital. 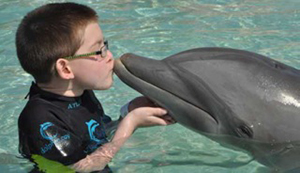 The doctor ordered a CT scan. I sat nervously in the waiting room. Thirty minutes later, which seemed like hours, they brought us back to the room to give us the results.  The nurse said, “The radiologist has the results of the CT and we believe he has an ependymoma.”  I said, “What is that?” She replied, “It’s cancer.” My jaw dropped. Tears came to my eyes. I leaned in to my son to comfort him. Only being seven, he seemed confused and did not understand.

Sebastian asked, “Am I going to die?” I just bawled my eyes out. I said, “I don’t know honey, I don’t know.” After I got all of my emotions out while clinging onto my son as if I was going to lose him right then, I calmed down. I felt a sense of determination. I knew that crying was ok, but that now was a time to act! I dried my tears and looked at my son and said, “We are going to fight like hell to get through this. You saw momma and grandma go through it, and now you will too. Everything is going to be ok and I will be there for you through it all.”

We were immediately sent to the children’s hospital to prep for surgery. The world stopped. Nothing else mattered…nothing but that moment.

After getting Sebastian settled into his inpatient room, a team of doctors piled into our room. They explained the procedure and what they felt they could do. The goal was to completely resect the tumor from the base of his brain and hope that there was no spinal involvement.

The surgery was successful – most of the tumor was removed, except a small amount that they could not reach by surgery. At that point, we were ready to take good news and a smile from Sebastian. Groggy from sedation, he awoke in ICU a day later and nearly pulled out all his tubes. He was ready to get back to his childhood…but had to wait until he got better first.

The first few days were rough. He would throw up blood from the steroids. We couldn’t get him to eat for days. The tracheal tube loosened a tooth and that bothered him. We asked to remove it so he would at least try to take in a liquid diet. Low and behold, that worked. I knew that tooth was the culprit and within days, he was asking for mac-n-cheese again! 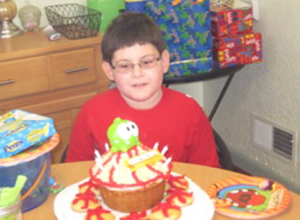 Things Seemed to be Stable

After eleven long days – we left the hospital. We were advised that he would need radiation therapy to remove the remaining part of the tumor that they could not get to in surgery. His was diagnosed with a grade II anaplastic posterior fossa ependymoma. They also scheduled a lumbar puncture later that spring to check for cancer in the spinal fluid. Miraculously, it had not spread! He had thirty-three daily rounds of radiation to his head.  A couple of days into his radiation treatment, I fell and broke my ankle and could not drive. I was so disappointed with myself but I found out that medical transportation was covered by insurance. Needless to say, it was definitely a test of my strength with a full leg cast during the hot summer, but we got his treatments done. My leg healed over the next few months, Seb had his follow-up MRIs and things seemed to be stable. Nothing new to worry about, so we continued daily life.

The very next year I needed to have a prophylactic hysterectomy. I am a cancer survivor myself, so this was merely a precautionary surgery. I’ve had nine previous surgeries for things related to my inflammatory breast cancer. Sebastian’s grandmother is a stage IIIB breast cancer survivor. Sebastian was still doing great. In fact, they said that the tumor was shrinking. I had never been happier, aside from my open abdominal incision for the hysterectomy. Life was good.

Then, in the fall of 2013, Sebastian’s oncologist noticed that his tumor seemed to have grown a little since his last MRI. This put me in a downward spiral of depression. I ended up in the hospital after a very painful anxiety attack. It just seemed that we couldn’t catch a break. All we needed was a LONG break from all of this surgery, treatment, and hospital stuff for all three of us.

After recovering and coming home I said to myself. “I’m NEVER letting an anxiety attack lead me to a hospital stay again!” I looked online for support groups. I started with Facebook, knowing that there might be groups out there. In December of 2013, I came upon a group called EpendyParents. Instantly, I felt like I belonged. I found knowledge and support I could not get elsewhere. We all have ‘Ependykids.’ We all understand each other.