Shelby was born on March 30, 2006 and was a healthy baby except for a slight lazy eye that we were told not to worry about. When Shelby was 17 months old, our family flew to the Midwest to visit with my grandmother before she passed away from colon cancer. Throughout most of our trip Shelby had a runny nose and in general, seemed miserable. She even fell out of a camper straight onto her head. We rushed her to the ER and were told that her eyes looked fine and she did not have a concussion. 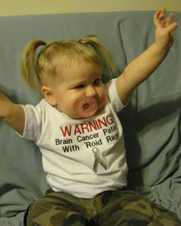 Returning home, Shelby still seemed miserable, so we took her to the pediatrician, multiple times. We were told she had an upper respiratory infection, was dehydrated and had an intestinal blockage, amongst other things that made her very sick. She threw up everything she ate, slept nearly all day and stopped walking.

Finally, we saw a doctor in the ER that listened to all of Shelby’s symptoms and realized this was not a typical illness. The doctor sent Shelby for a CT scan. After nearly three weeks of waiting and lots of questions, we were given the results of Shelby’s CT scans. Her head was full of spinal fluid and there appeared to be a large mass at the back of her skull. The army hospital in Augusta, Georgia, was not set-up to care for children, so we were taken by ambulance to the Medical College of Georgia. I held Shelby the entire ride to the Pediatric Intensive Care Unit (PICU). That was the last time I got to hold my baby for nearly two weeks.

When we arrived at the children’s hospital they immediately conducted an MRI. Once the images came back, we met with the Pediatric Hematology/Oncology team as well as a surgeon. The consensus was that surgery must be performed to remove the tumor, as it was wrapped around her basil artery, slowly suffocating her brain.

Surgery was performed the next morning and we were blessed that the best case scenario came true – Shelby’s tumor was completely removed. The tumor turned out to be a grade 3 ependymoma.  It was recommended that Shelby have 30 days of radiation therapy to help kill off any remaining cells. We thought surgery and radiation were the hard part and we’d be home in a few days, once the fluid drained from Shelby’s brain.

Little did we know that our journey had just begun. 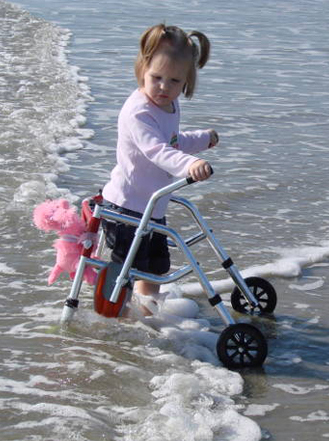 During our PICU stay, we learned about extubation (removing the breathing tube), EVD’s (internal ventricle drains), DVT’s (deep vein thrombosis) and how difficult it is to keep a determined 18-month-old baby under sedation if she is ready to wake up! We spent nearly two weeks in the PICU before being moved to the pediatric cancer area. It was here that we learned about posterior fossa syndrome and were told that Shelby might never learn to walk, talk or even eat and drink on her own again. The doctors forgot to give Shelby that note, however, and about a week later she pointed at the door and said very clearly, “Go!”

Because of the placement of the tumor and the surgery required to get it out, Shelby was left with no feeling at all on the right side of her body. She started what we call her “work” while inpatient. She did physical, occupational and speech therapy each day to get as much feeling as possible back to her right side.

Shelby has phantom pains, mostly on her face, and picks to try to stop them. She has chewed off the corner of her lips, picked off a small portion of her nose and given herself an 80% corneal abrasion. She is legally blind in her right eye and we’ve had to stitch the corner of it closed to try to protect what sight she has left. As she’s gotten older, her picking has diminished, so we are hopeful that the damage can be repaired. 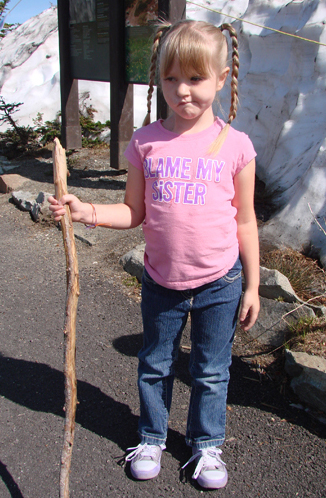 Shelby started walking with the help of a walker soon after her second birthday. Now, at six years-old, she walks and runs on her own. She compensates so well that most people have no idea of her past. Shelby is in a regular first grade class, but is allowed a few modifications. She sits with her left side facing the teacher so she can see and hear better (she is also deaf on the right side, which we discovered about a year ago). Shelby is also given extra time for writing, as this is still difficult for her since she now uses her left hand.

Through everything, our little girl has kept her sweet smile and great attitude. She is a wonderful testimony to many other cancer patients that we meet. She has no fear of the elderly and seems to have an almost sixth sense when meeting other cancer patients. She will seek out strangers just to touch their hand and it’s only later that we learn they are, or someone they know is, going through treatment or just got a diagnosis.

When life gave Shelby lemons, she made lemonade and shared its sweetness with everyone she knew. Shelby’s five year MRI was on October 9 and after five years of check-ups with no re-occurrence, she is officially in remission!