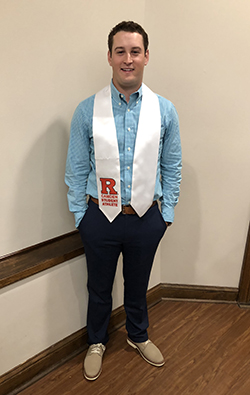 In the summer of 2012, I suddenly had no appetite for breakfast or even the rest of that day. This was rare for my 17-year-old self, but at the time I just assumed it was a bug. No appetite soon led to vomiting, fatigue and unexpected weight loss throughout the next several weeks. Unfortunately, I had a barrier that would try to hold me back my entire senior year of high school and my first year in college. My symptoms only worsened after the summer of 2012, but I didn’t want it to hold me back from such exciting years.

My symptoms would eventually become so harsh that I would vomit every morning and usually multiple times throughout the day. I managed to play on the soccer team, play on the golf team, and participate in every club or activity that I was interested in. I have so many vivid memories of my senior year of high school not just because it was a special time in my life, but because it was such a hard time in my life as well. But it was only the beginning.

One of the main things that helped me cope with my battle was my passion for golf. Even though I spent many rounds running into the woods to find my ball and vomit, it was my therapy and distraction from my illness. I was fortunate enough to carry my passion with me to college and play for Rutgers University-Camden. My fight never stopped because for those two years of my life I didn’t know what kind of beast I was battling.

Because my symptoms were mainly stomach issues my diagnosis became difficult. My family and I traveled to many different health centers looking for answers but unfortunately, they were all focused on my gastrointestinal issues. It was frustrating because I was put on many different medications (as well as small procedures) and just not getting better. My parents were even more frustrated because they knew how sick their son was and I think I was scared to face that reality. Of course, I wanted to feel better and put whatever this was behind me, but I was 18-19 years old and just wanted to live a normal life. Looking back, I wish I had been “pushier” with my doctors because now that I feel healthy, I don’t know how I could ever feel like that again every single day.

Relieved by a brain tumor diagnosis?

In the fall of 2014, I started my sophomore year of college. I was feeling sicker than ever. One golf practice I started seeing double of everything - two golf balls, two flags, two holes. I went home that evening and hoped it would go away by the morning. The next day before class I was talking to my mom and the double vision had severely worsened. “I’m seeing two of you right now,” I said to her. I wanted to go to class and see how I felt throughout the day and it was horrible. I saw two computers, two white boards, two professors, until I eventually had to run to the bathroom. This was the worst I had ever felt, and I had to go home and scheduled an eye appointment and even drove myself to the doctor. He did lots of measurements and examinations and asked if my parents were around. My parents arrived shortly after and my doctor expressed to us that it wasn’t an issue with my eyes - there was an immense amount of swelling on my optic nerve and it was a brain issue. The following day I had an MRI which revealed a large brain tumor in the fourth ventricle of my brain. To hear this news was a big scare of course, but my family and I felt some sort of relief as well. Finally, we had an answer and my new medical team would strive to improve my health. 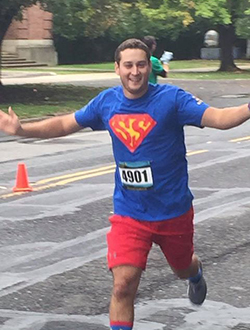 Two days after my diagnosis I was in surgery to remove the tumor. After a full removal I had a lot of work to do in recovery. The tumor was in between my cerebellum and brain stem and it was so large, so I had to regain a lot of strength, balance and coordination. I spent 42 days in acute rehab before I started radiation.

As soon I woke up from surgery, my previous symptoms felt relieved - I had an appetite and didn’t feel nauseous. One thing that changed completely was my vision which is now permanently double.

My recovery was just as tough as battling with my symptoms and it’s something that makes me very proud.

My recovery went so well both mentally and physically. I returned to the things I loved more quickly than expected and graduated in 2018. I now work at Penn Medicine, the place that has played such a pivotal role in my life, and it’s exactly what I wanted. Because I received such exceptional care and met so many outstanding healthcare employees, I wanted to be a part of it and give back.

In February 2020, I had a routine MRI check-up that revealed a recurrence of my ependymoma; this time in the left occipital lobe. This diagnosis felt a little different than the last time. This time I was 24, advancing in my career and growing in life - I was excited and I felt healthy. I had another successful surgery and recently finished another round of radiation.

I am feeling well and on the road to recovery once again. One thing that has always been ingrained into me from my family, friends and medical professionals has been believe. Believe can mean so many different things and each one is personal. Whether it’s your faith or your fight, you have to believe in it. It’s easier said than done. I have found myself struggling to believe many times throughout the past seven years. One thing that has always helped me is the support of others. I am so grateful to have such a large support filled with family and friends. When I find myself lacking belief, I turn to them for encouragement and drive to keep fighting.