Tony Adjusts to His New Body 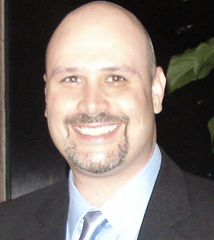 In November 2006, I was working out to keep my weight down. My wife was pregnant with our second child and I did not want to balloon-up again like I did with our first child. My neck started to feel really stiff and I attributed it to sleeping incorrectly or pulling a muscle while doing sit-ups. For two months, the pain persisted, so I decided to see my family doctor who ordered X-rays and prescribed painkillers and muscle relaxers. My X-ray results came back negative. The doctor thought I had early stages of arthritis, which seemed odd since I was only 34-years-old, so I was sent to physical therapy.

My symptoms started to worsen and intensify. My fingers turned blue and numb and my stiff neck became incredibly painful. The pain was so bad it kept me up at night and brought me to tears. At this point, I felt it was not arthritis and decided to see a chiropractor. She reviewed my X-rays and made some adjustments, but the symptoms only worsened.

I decided to see an orthopedic surgeon in St. Louis. He ordered tests, including a MRI, and I had to wait two weeks for the results.

The Day I Will Never Forget

On April 17, 2007, with little worries, I had a doctor’s appointment to get my MRI results. The doctor placed my scans on the white screen. There was a mass growing inside my spinal cord from C3-C7. My heart hit the floor and I thought of my wife, daughter, and unborn son.

The doctor referred me to a neurosurgeon to explain my diagnosis. On the way to the neurosurgeon’s office, I called my wife and said, “I have a tumor in my spinal cord and am on my way to see a neurosurgeon.” I started to cry, but got off the phone and gathered myself so that I could talk to the neurosurgeon. I knew my wife was frantic, but my mother was on the way over to calm her down.

The neurosurgeon said that it was most likely an ependymoma. He explained that the tumor needed to be removed or I would have all kinds of irreversible neurological damage. He referred me to a more experienced doctor.

When I got home, everyone gave me hugs. I told them I felt like I was going to be okay. A few days later, I went to see the specialist. He confirmed that the ependymoma needed to be removed and soon, as it was already causing damage. He said that I would have numbness and some deficits after surgery because the spinal cord does not regenerate. There was no way to get out of this surgery “scott free”, so to speak. I asked if there were any other alternatives, such as chemotherapy or radiation, but nothing was as effective as removing the tumor. We decided to have surgery the next week because our baby boy was due in one month. I cannot put into words all of the emotions I felt leading up to the surgery.

My surgery was scheduled for April 24, 2007. I was nervous, but my wife and family calmed me down. I got prepped for surgery and gave my wife a kiss and told her I would see her in a few hours.

I woke up in a recovery room with surprisingly no pain. The doctor performed a neurological test and was tickled pink that everything was functioning normally. He also said that my wife was rushed to another hospital because she was having labor pains. At 11:47 p.m. my son was born. I talked to my wife from ICU and felt at peace knowing that he was healthy and my wife’s delivery went well.

Recovery was a long process. For six weeks, I received physical therapy and after four months I went back to work. Recovery involves the mind and body, which is not easy. I went into a severe depression for about two months following my return home.

Everything was so new and I could not get a handle on life. After all, I had a new baby, I could barely walk, and there was no reassurance that I was going to get any better. I went through a lot of emotions and finally, I came out on top. I walked as much as I could and rode miles and miles on my bike. I can’t tell you how much exercise speeds the recovery. My body will never be like it was. I still have numbness from the waist down and I have spasms in my lower back, but with exercise and stretching it is manageable.

Since my surgery, I have had a lot of help from my friends at the Spinal Cord Tumor Association. My life changed on April 24, 2007, but now I have a deeper appreciation for relationships and spend time doing the things that matter the most. I have learned to be patience with others and myself. It is a very humbling experience to have to adjust to a new body and accept loss, in some degree. The main thing I learned is that no matter what happens to an individual, in time his mind and body will adjust.

A version of this story was originally posted on the Spinal Cord Tumor Association’s website.