CERN Foundation At The 2012 Annual Society For Neuro-Oncology Meeting

The 17th Annual Scientific Meeting and Education of the Society for Neuro-Oncology was held on November 15-18, 2012, in Washington DC.

Over 1,600 physicians and medical professionals from around the world attended the meeting to share knowledge and learn of the latest advances in neuro-oncology research. We were delighted that investigators from the CERN Foundation were invited to present two oral platform talks and five poster presentations at this prestigious event. An overview of the CERN supported presentations is provided below. 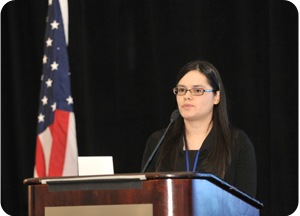 Ependymoma is a central nervous system tumor that affects children and adults in the brain and/or spine. Research is limited due to its relative rarity resulting in most clinicians seeing only a handful of patients. The Ependymoma Tissue Correlates Study is the largest tissue repository of ependymoma tumors to date, and consists of clinically-annotated tumor tissue submitted from participating centers from around the world. An interim analysis was conducted on 313 patients looking at clinical course and progression free survival. Adults (age 18 and older at diagnosis) comprised 57% of the sample. Grade II ependymomas were the most common tumor. During the central review, the tumor grade was re-classified for 21 patients with approximately half moving to higher grade. The most common location was infratentorial brain. The majority of patients underwent a gross total resection at their initial surgery. Radiation was frequently given after surgery. Forty one percent of the patients had at least 1 recurrence at a median time of 9.1 years. Short progression free survival was associated with younger age at diagnosis, supratentorial tumor location, grade 3 or grade 1 diagnosis, and a subtotal initial resection. When seen separately, the adult’s risk of early progression increased with supratentorial tumor location, grade 3 or grade 1 diagnosis and a subtotal initial resection. For children, their risk increased with a grade 3 diagnosis and a subtotal initial resection. The Ependymoma Tissue Correlates Study is continuing to grow with 17 participating centers. In the future, a longitudinal component will be added to incorporate more of the patient’s clinical course. Also, a molecular biomarker analysis is currently underway and will be combined with this clinical analysis to derive a more comprehensive model for progression free survival in ependymoma patients. 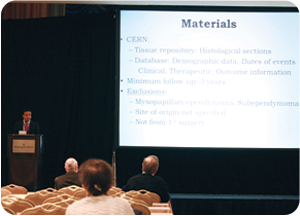 Aditya’s Abstract Presentation: Histological predictors of outcome in ependymoma are dependent on tumor location in the central nervous system.

Ependymomas may originate in different compartments within the central nervous system. At present, the World Health Organization guidelines recommend a uniform grading scheme be used for ependymomas, independent of the anatomic site of origin. In this study, we performed detailed histological examination on 238 ependymomas, including 103 that originated in the posterior fossa, 64 originating in the supratentorial compartment, and 71 from the spinal cord.

We found that ependymomas originating from each of these different sites had distinct histological features that were associated with patient outcomes. These results suggest that the grading schemes for ependymomas may need to be individualized based on the location of the primary tumor. To read the PubMed Abstract, click here. 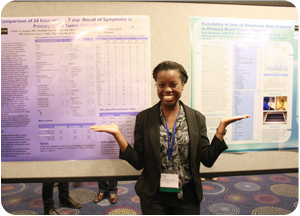 Alvina’s Posters: Focused on the completion of the MDASI-BT in tablet format in primary brain tumor (PBT) patients.

The purpose of first poster was to demonstrate the feasibility in capturing electronic data in primary brain tumor patients as opposed to using paper and pen method. Patients completed the MDASI-BT in tablet format and we hypothesized that the use of the tablet would improve data capture, reduce completion time and result in less error and reduced workload. The results demonstrate that using a tablet to collect pertinent patient data can be feasible with PBT patients at various stages in the illness trajectory and with poor performance status. Completion time was similar to that with paper and pencil, but with reduced research staff time due to direct data entry. The data also demonstrated possible uses of managing research data directly entered into the tablet for future studies, reducing time spent by research staff checking the completion of questionnaires and having more complete data overall.

The second poster compared 24 hour versus 7 day recall on the MDASI-BT tablet format to determine which time point symptom severity should be assessed. The study assessed patient’s ability to recall severity of symptoms on the MDASI-BT at one point in time. Patients were categorized into 3 patient groups (newly diagnosed, on-treatment, pot-treatment surveillance). Overall the results indicate that the 7 day recall period resulted in higher severity rating in all groups. Also, although there is variability in the severity of symptoms report between the time intervals, this difference overall is less than one point and may not be clinically significant if the researcher is interested in the overall severity and not evaluation when the symptoms is most severe. 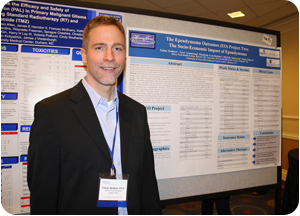 Most recently there has been new understanding about the clinical and genetic causes of this brain tumor but the socio-economic impact of the disease remains unclear. The Ependymoma Outcomes (EO) project is designed to collect patient reported data regarding the clinical presentation and course through an online survey. The EO project one focused on the clinical characteristics of the disease. A follow up survey investigated the socio-economic impact of the disease. Adult ependymoma patients completed the EO Questionnaire (EOQ). The EOQ is a detailed questionnaire that captures disease status, symptoms, clinical insurance status, employment, direct costs, quality of life issues and functional status. Descriptive statistics were used to describe clinical status. Fisher’s Exact test and linear modeling was used to test for correlations.

As a result, 68 patients participated (57% female; mean age 46.5 years {range 25-68}). Tumors were located in the brain (45%), spine (51%) or both (4%). All the patients in this survey had some kind of medical coverage (Private insurance/HMO 50%; Medicare/ Medicaid 25%; Others 25%). 57% of all patients remained in the workforce (49% full time; 7% part time) while 25% were on disability due to ependymoma. Disability, work status and independent living were not significantly related to disease location. Not surprisingly, patients that were able to continue to work had a significantly higher income than patients who left the work force (p 0.0037). The mean monthly co-pay for medical costs was $229 ($10-3000). Co-pays did not significantly differ by insurance type. Patients spend on average $84 ($3-1000) on prescription drugs, $23 ($5-100) on over-the-counter medications. Thirty-three patients reported spending monthly $5 – $600 (mean $63) on alternative medicine. 46 patients lived independently at home. 12 patients needed help from their partner, 7 received help from other family members. Ependymoma has a high socio-economic impact on patients and families. Even with full medical coverage, patients have significant out of pocket costs associated with their disease. 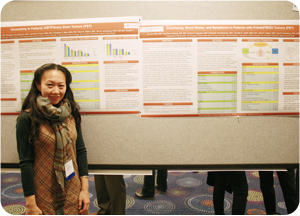 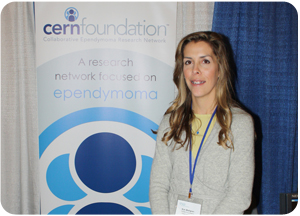 Kim Wallgren displayed CERN information at the exhibit area where other doctors could ask questions about the Foundation.