CERN Foundation At The 2015 Annual Society For Neuro-Oncology Meeting

The 2015 Annual Meeting of the Society for Neuro-Oncology (SNO) was held from November 19-22, 2015 in San Antonio, TX. Researchers supported by the CERN Foundation were well represented at the meeting.

The meeting had a record attendance of over 2200 registrants. A brief synopsis of their key findings is provided below. 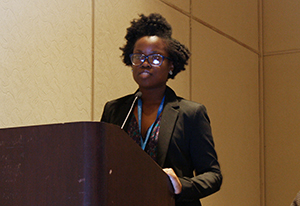 Research Associate for the CERN Foundation

Understanding the disease presentation and experience of patients remains an uncharted domain for patients with rare tumors. The Adult Ependymoma Outcomes (AEO) Project is an online questionnaire established in 2009 that has been investing the data gleaned from this self-reported information to allow physicians to better understand this uncommon tumor.

The AEO was completed by 264 ependymoma patients; the majority were female (56%) with a median age of 47 (range 18-77).  Participants were diagnosed with either ependymoma in the brain (43%) or spine (59%).  Approximately 50% of patients with brain tumors were symptomatic for less than 3-4 months before diagnosis. Conversely, over 70% of spine patients were symptomatic for a year or more before surgery. The majority of patients had a grade II ependymoma, although 50% of spine patients were uncertain about their tumor grade.  Over half (54% brain, 60% spine) of the patients had some form of treatment after surgery. There were a high number of participants reporting no tumor recurrence (brain 68%, spine 73%).  However, despite prolonged tumor control, a high symptom burden was reported, with 53% of brain participants reporting fatigue as their most severe current symptom while 55% of spine participants reported numbness  Most patients had follow-up care provided by a neurosurgeon (approximately 50%) or by a family care provider (20%).

In conclusion, vital information can be collected from online questionnaires about the experience of patients with rare tumors. Although results are limited to patients with access and interest, these results can provide guidance to develop education and interventions for specific symptoms, and generate research questions.  Furthermore, these results underscore the importance of early detection to improve quality of life. 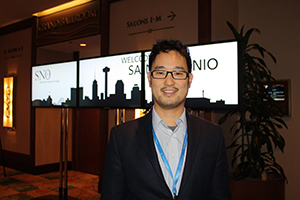 Eugene’s Poster: Self and Proxy-reported Clinical Outcomes Assessments (COAs) in a Large Cohort of Children with Ependymoma

Ependymoma is the second most common malignant brain tumor in children. Children with ependymoma frequently have prolonged treatment courses and undergo recurring cycles of remission and progression that may lead to significant morbidity. There has been increasing emphasis on the evaluation of patient-reported outcomes (PROs) in children with brain tumors. However, very few studies have examined Clinical Outcome Assesments (COAs) including PROs and observer-reported outcomes in children with ependymoma.

Data in the Pediatric Outcomes Surveys (PEO) study were collected by an online survey using self-report and parent-proxy measures.

Participants completed PROMIS scales which ask questions about physical social functioning, level of fatigue, mood, and peer relations.  Ratings on these scales can then be compared to the mean rating for children who do not have brain tumors Mean scores for most scales were generally within normal limits, reflecting good overall functioning. In the Physical Mobility domain, the item that was reported as occurring with the highest frequency (i.e., “very much”) for the most children was “my child has trouble running like other children” (24.0%). Approximately 1/3 of self- and parent-reports described poor physical mobility. 1/3 of parents perceived their children as having elevated levels of fatigue. Although children generally indicated typical levels of anger, depression, or anxiety, nearly 1/3 reported peer relations that were below the mean. In general, parents tended to rate their children as having worse physical functioning and more difficulty with anxiety or fatigue than the patients. Higher parent-rated difficulties with physical mobility were correlated with more fatigue and problems with cognition. Greater difficulties with peers was also significantly associated with parent-reported cognitive problems in the child. In terms of medical predictors, younger age at diagnosis was associated with higher parent-reported problems with upper extremity functioning, but not with reports of fatigue, difficulties with peers, cognition, or physical mobility. Outcomes did not vary significantly with a child’s number of previous surgeries, whether or not their tumor had recurred, or whether or not they had been treated with chemotherapy.

In summary, despite a typically chronic disease course requiring multiple therapies, children with ependymoma and their parents reported average ratings as a group across multiple scales.  However, there are a sizable percentage of children who exhibit difficulties in physical and social adaptation. Demographic variables did not predict parent-reported ratings of their childrens function and symptoms.  Somewhat surprisingly, treatment details did not seem to predict outcomes either. Parents often report greater difficulties with physical and psychosocial measures than the patients. Prospective, comprehensive is needed to further assess predictors of physical and psychosocial functioning in children with ependymoma. This may then lead to improved support for both children and families with ependymoma.