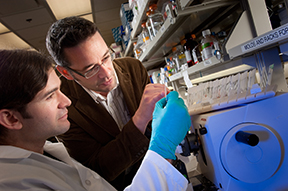 Our researchers can tell whether we are correct in understanding what cell type generated the tumor and what mutations or copy number changes were in play during the development of the tumor. In addition, the models allow us to test new treatments and combinations of treatments in a preclinical trial setting with the hopes of sparing patients diagnosed with ependymoma.

To serve our Project I team (Clinical Trials) and generate Project IV appropriate data and information so that we can create the best possible clinical trials.

We have made remarkable progress in the last couple of years in Project IV.  In 2010, the CERN Foundation research team published a paper in Nature, one of the highest impact journals in science, which chronicled their steps leading to the creation of the first ependymoma laboratory model.  The researchers were able to take a single gene that they suspected was in involved in ependymoma and introduce that gene in to the right cell type. While that was a major advance in 2010, the entire process took the team three years to complete, for a single gene.  The research team then got together and made a list of the top genes that they thought were involved in ependymoma; that list came to 125 genes.  As one could imagine, following the current process of laboratory model development, looking at 125 genes would have taken forever.  They knew that they needed a solution and thus began the development of a high throughput screening system that would allow them to screen up to ten genes at once.  This new high throughput screening process literally, reduced the screening timeline by over 100 years!  The CERN Foundation Project IV team has since completed screening on all 125 genes, narrowing the number of genes that have a potential role in ependymoma down to twenty genes.  The main reason that this is so important is because there are a number of those genes that could actually prove to be new targets for ependymoma.

With some of the genes that cause cancer, there are too many of them in the tumor and certain drugs are designed to bind to those proteins and stop them from working.  As a result of Project III (Drug Development) the CERN Foundation researchers have access to 1.2 million compounds, including chemicals from nature.  Having built these very accurate tumor laboratory models of ependymoma the researcher team is now taking two approaches – blocking the genes that are driving the cancer and screening the models with 1.2 million compounds to see which compounds are effective at stopping the tumor from growing.  These studies have generated several leads for the team, and have led to the development of a Phase II study in pediatrics involving the drug, 5 FU.

What’s on the Horizon?

Our CERN Foundation Project IV team has identified another set of drugs that have shown promise in effectively preventing the tumor from growing in their ependymoma laboratory models, and they plan to bring this drug to the clinic very soon.

An extremely exciting breakthrough has been discovered under Dr. Richard Gilbertson’s leadership, and has been published in Nature.  It is the most significant result in his life to date since he started research, please click here to read the article.