The Foresters will be holding an Ependymoma Awareness Game on July 25, 2015. 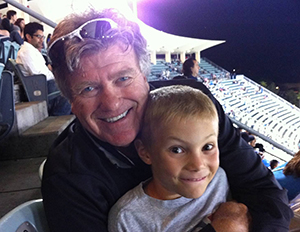 In the Summer of 2012, Samuel started complaining of pain in his left leg and hip. At first we thought that maybe he had just pulled a muscle or pinched a nerve. After a few visits to his pediatrician, he was referred to an orthopedic surgeon in Santa Barbara, CA and physical therapy.  He had MRIs of his pelvis and legs, bone scans and blood tests, which all showed nothing. The doctors were stumped.  They decided to do an MRI of his entire back and that is when they discovered a tumor along his spine.

Samuel had back surgery to remove the tumor at Children’s Hospital of Los Angeles, a participating CERN Center. This relieved him of the pain he was experiencing. Since they could not remove his entire tumor due to its location, our family relocated to Houston for two months so Samuel could have proton therapy radiation to his remaining tumor.

Since the proton therapy, he has had a year of chemotherapy in Santa Barbara. His cancer has been stable for a year, and he gets regular MRIs to monitor the tumor size in order to determine any further treatment. He is doing great and is living an active life, just with more doctor’s appointments than your average kid.

Samuel’s cancer is called myxopapillary ependymoma.  After his diagnosis, we searched far and wide to understand this disease and who was researching it. We found the CERN Foundation. It is the only organization dedicated to studying this type of rare cancer.  Coincidentally, Eric Pintard (#19 for the Santa Barbara Foresters baseball team), who founded Hugs for Cubs with his father Bill Pintard, had an ependymoma.  After making that connection, in recent months our families have joined forces together with the CERN Foundation to help raise awareness of ependymoma. We met with Mayor Helene Schneider in April 2014 to recognize Ependymoma Awareness Day in Santa Barbara, and that was the kickoff for our future ependymoma awareness activities. 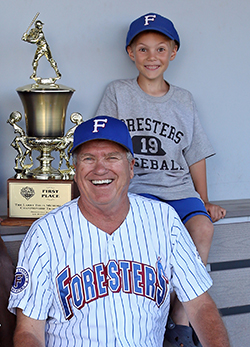 It meant so much for Samuel and our family to have the support of Hugs for Cubs and the Foresters in 2013. Just being around baseball, one of Samuel’s passions, has helped our entire family forget about the cancer and to focus on fun. Samuel is happy to participate in Forester’s baseball camp this summer, as well as returning as a bat boy for the Foresters 2015 season.

The Foresters will be holding an Ependymoma Awareness Game

The game will be held on Saturday, July 25, 2015 at 5:00 p.m. at the UCSB baseball field. The game will be at Caesar Uyesaka Stadium in Isla Vista, CA on the UCSB campus. Tickets will be sold at the gate and are all general admission: $6 for adults, $3 for seniors and $1 for kids.