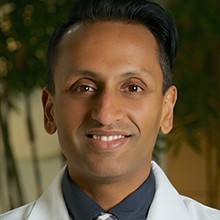 Ependymoma is a devastating disease with no current cures. But physician-scientist and neuropathologist Sriram Venneti, M.D., Ph.D., of the University of Michigan, aims to shift this paradigm by investigating the mechanisms that drive childhood brain tumors like ependymoma.

“In the last 10 years we have seen a radical change in how discoveries are being made because we no longer look at cancer as a purely genetically driven disease,” says Dr. Venneti.

With this understanding, Dr. Venneti has focused his research on the epigenetics of brain tumors, or studying heritable changes in gene expression that don’t involve changes to the underlying DNA sequence.

Dr. Venneti’s epigenetic research is building off work published by a team led by Michael Taylor, M.D., Ph.D., at the Hospital for Sick Children at the University of Toronto in Canada. They discovered that there are no recurrent mutations, but rather specific epigenetic changes in DNA methylation.

“A lot of puzzling things are emerging in the molecular biology of childhood brain tumors including ependymomas, which is exciting because it allows us to come up with new ways to understand the disease,” says Dr. Venneti.

“Now we want to know how the epigenetic mark is lost. Understanding this may help us understand what pathway we can inhibit or reverse to create new drugs to treat childhood ependymoma,” says Dr. Venneti.

Dr. Venneti considers ependymoma an orphan tumor. “It is a very challenging disease and it gets less attention and funding than other tumor types,” he says.

He is grateful for patients and their families, the CERN Foundation and the Robert Connor Dawes Foundation who raise awareness and donations for ependymoma and researchers like him.

“Awareness is not going to come from scientists. It’s families sharing their experience with ependymoma that will transform the way we look at the disease,” says Dr. Venneti.