For over fifteen years, the CERN Foundation has been at the forefront of the fight against ependymoma, a rare type of primary brain and spinal cord tumor.

Taking a broad investigative approach involving scientists from some of the world’s most respected cancer centers, the work of the CERN Foundation has contributed to a vastly improved understanding of the genetic make-up and biology of ependymoma. Today, this knowledge is helping scientists around the world develop new therapies and improve the quality of life for those living with the disease.

The concept for the Collaborative Ependymoma Research Network (CERN) Foundation was sparked in 2006, when during the course of treating a patient facing a recurrence of ependymoma, Dr. Mark Gilbert recognized that there was relatively little in the medical literature on this type of tumor. Responding to the need for more information, Dr. Gilbert proposed the creation of an international group of researchers who would for the first time join together to take a collaborative approach to investigating the disease.

To help him in this effort, Dr. Gilbert reached out to a core group of colleagues, including Dr. Richard Gilbertson, a renowned expert in the research of childhood brain tumors, Dr. Kenneth Aldape, a leader in the pathology of adult brain tumors, Dr. Terri Armstrong, an expert in clinical care and patient outcomes, and Dr. Amar Gajjar, one of the United States most respected pediatric neuro-oncologists. Together, they assembled a team of laboratory-based and clinical researchers who were not only top in their field, but were also known for their collaborative mind set. 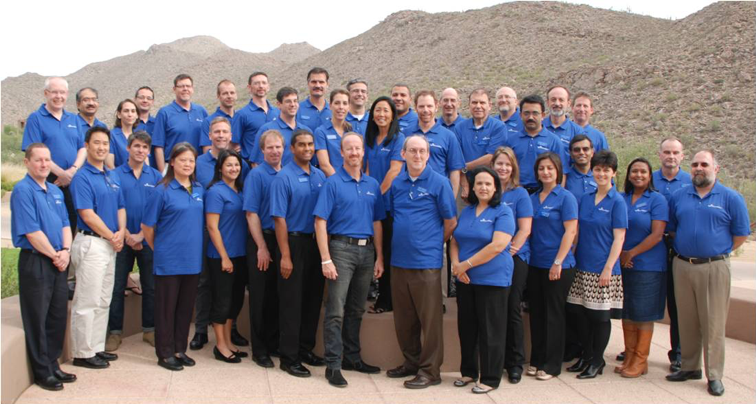 Pictured: The CERN network at the 2011 annual meeting.

This collaborative network included scientists and clinicians who specialize in treating and researching ependymoma. The clinicians came from the top research hospitals from around the world, each with his or her unique expertise. This international network was instrumental in completed four multi-center ependymoma focused clinical trials by the end of 2018. From these CERN supported clinical trials, the network completed the first prospective adult clinical trial of chemotherapy for recurrent ependymoma and identified eighteen genes that contribute to childhood ependymoma.

Over the years, the work of the CERN Foundation has greatly expanded our understanding of ependymoma. CERN funded research has been published in some of the most respected medical journals in the world.  CERN supported investigators have led an effort to develop a biologically-based molecular classification system of ependymoma, which in turn is contributing to the development of individualized therapies based on tumor specific targets. This research found differences in outcome in patients with similar tumors: if patients with aggressive tumors can be identified at the time of diagnosis, those patients could be targeted for intensive therapy. Patients with less aggressive tumors could be spared the potential harmful side effects of intensive therapy, if found to be unnecessary to achieve a good outcome.

These advances would not have been possible without data collected through the CERN tissue study, which today contains close to 1000 ependymoma tumor samples - the largest repository of its kind in the world.  This tremendous resource will allow ependymoma researchers around the world to more accurately classify ependymoma tumor types and predict outcome.  Now, and in the future, the CERN tissue bank will help scientists to predict with increasing accuracy which drugs, and combination of drugs, will have a therapeutic effect.

As the only organization devoted solely to ependymoma, the CERN Foundation’s awareness and patient education efforts are a key part of our organizational mission. CERN has developed a comprehensive Ependymoma Guide and thousands of copies have been distributed for free worldwide. Our website is constantly updated with coping strategies, inspirational stories and news from the field, and our social media efforts allow for patients and caregivers to connect with CERN and each other.

Last, but certainly not least, our annual Ependymoma Awareness Day has become the flagship event in the ependymoma community. This outreach effort has had a heartwarming and positive impact on the lives of children and adults living with ependymoma, their families and caregivers. CERN’s advocacy efforts have also brought a much needed spotlight to this disease as we seek to educate the public about ependymoma.

Despite tremendous advances made over the last ten years in our understanding of the basic biology of ependymoma, new treatments and therapies are needed. Future advances will only be possible though donations and the collaborative relationships between researchers, clinicians, patients, caregivers and industry. The CERN Foundation will continue to serve as a platform for these collaborations and as a catalyst for progress as we work closer towards a cure everyday.

Since 2016, the CERN Foundation and the National Brain Tumor Society have joined forces to help people with ependymoma and advance ependymoma research toward the development of new and better treatments. Building upon years of collaboration, starting with co-hosting the Ependymoma Awareness Day event in Washington, D.C., then Head to the Hill participation, and most recently the joint creation of the Ependymoma Fund for Research and Education, we are excited to officially announce the CERN Foundation is now a designated program of the NBTS. With CERN’s focus and expertise in ependymoma, the National Brain Tumor Society’s broad platform for advocacy, and a shared commitment to collaborative, treatment-focused research, we are combining the strengths of each organization to better serve patients and their families. Learn more.