Life Is More Than The X’s And O’s

Football and Unbearable Back Pains

In 2008, I was an offensive line coach at Colgate University in New York. So when I started having backaches and numbness in my legs, I assumed it was from the long car rides I took to recruit football players. Eventually, I consulted the team doctor who thought I had a loose disk from playing football when I was younger. He ordered X-rays and a MRI.

Turns out, the culprit had nothing to do with football. I had a tumor on my spinal cord.  I was in shock. The neurosurgeon thought the tumor was non-cancerous because of its smooth shape, and the surgeon we met with for a second opinion agreed.

Two months later, I underwent surgery to remove the tumor. It wasn’t until doctors told me that there was a 50 percent chance that I wouldn’t be able to walk after surgery, that I realized the severity of the operation itself. However, the long procedure was a success; doctors believed they had removed the entire mass. My wife mentioned the surgeon told her the first read from pathology showed the cells were aggressive and not what they thought, so he was sending it out for a second opinion. We would follow up in his office.

I was diagnosed with stage II ependymoma. Five years ago searching for spinal ependymoma on the web really only brought up pediatric information. How could I educate myself and prepare for the next steps with limited reference material out there? The follow-up appointments begin. First a baseline MRI to compare future scans for tracking recurrence, then a trip to the neuro-oncologist followed by a visit with the radiation oncologist. The feedback we were given baffled me – ‘the protocol for next steps is a gray area for this type of cancer.’ We were told there have not been enough studies done since the cancer is rare with adults. Really? Gray is not the shade I was going for. The MRI showed no sign of the tumor, so given my age and the complete resection, we opted to save radiation. Fortunately, I had a good prognosis.

Recovery from that type of back surgery is tough. You have to relearn a lot. Some of my players would stop by the house to take me for a ‘walk’. After connecting with others with my same diagnosis – I am thankful to have only minimal side effects. I returned to coaching and now am the offensive coordinator at Mercer University in Georgia.  Every year, I have scans and checkups and so far, so good. 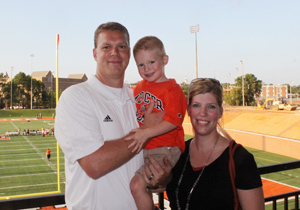 My Experience Changed my Priorities

My experience made me realize how important life is. I often remind my players of the quote that I live by, “If it is to be, it is up to me.”

When I was diagnosed with cancer of the spine, I was scared.  But my faith, family and friends supported me the whole time. Before this experience, I was defined as a coach. Now my priority is my family, instead of the X’s and O’s. I continue to fight so I can see my four-year-old son grow-up and welcome my new baby in December.

My Respect for CERN

For those of you who are recently diagnosed, or dealing with recurrence, I want you to know what an asset you have in the CERN Foundation. Five years ago I went from having what they thought was a benign growth that required a risky surgery, then hearing those three words that changed my life, ‘you have cancer’, and they topped it off with my follow-up options are a gray area. How different things would be if I were diagnosed today! You have hope in the CERN Foundation…they are giving us options. Defining the disease, collecting data, connecting survivors and caregivers, creating clinical trials, expanding treatment hospitals for adults in the U.S. to nine hospitals, and so much more.

Contact them today. Get involved. If it is to be, it is up to me.

In 2010, The Colgate Chapter of Uplifting Athletes chose the CERN Foundation for the Lift For Life fundraiser. For three years, the student athletes have raised money for ependymoma research and to raise awareness about this rare disease. Even though I wasn’t their coach in the last season, they still continued their effort for one more year.  I am honored that they have done this for me.