Making The Most of Every Day With Ethan

Something Was Not Quite Right

Around Christmas of 2011, we began to notice that something just wasn’t quite right with Ethan, but we couldn’t really put our finger on what was wrong. Compared to other kids, he was falling behind.  His language was delayed.  He started walking at 18 months, but rather than improving, he seemed to be getting more and more unsteady on his feet.  There were behavioral changes as well, but it was hard not to say it was “the terrible twos”.  We saw our local doctor, our child health nurse, pediatrician, a speech therapist, and an ear, nose and throat specialist, but got no answers. Then he stopped eating, wouldn’t sit down properly, and seemed to be in pain. 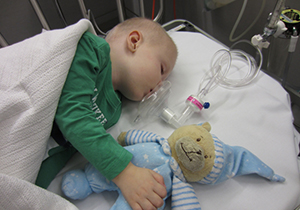 We ended up taking Ethan to the emergency room at a children’s hospital. After a number of visits, he was admitted for a series of tests.  Eventually, the doctors found Ethan’s tumor during an MRI scan under general anesthetic.  His tumor was wrapped around his brain stem in the posterior fossa, about 6cm by 7cm – the size of a fist.  That was in January 2012.

When the brain tumor was first located, it was so large that it blocked the flow of cerebrospinal fluid in Ethan’s head and spine. This resulted in build-up and the pressure was slowly squeezing his brain against the inside of his skull, causing him agonizing pain.  Surgeons inserted an external ventricular drain to relieve the pressure. A week later, Ethan endured a marathon nine-hour surgery to remove the tumor. Amazingly, doctors were able to remove approximately 98% of the tumor. We were relieved that Ethan survived the surgery and he was admitted to ICU. Later, pathology results came back with a diagnosis of grade 2 ependymoma. 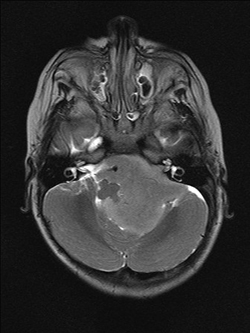 Unfortunately, the size and location of Ethan’s tumor and the unavoidable effects of its removal meant that he would have a long road to recovery. Initially, he was unable to even hold his head up or swallow his own saliva.  The pain from the surgery was so intense that he needed extra morphine just to be turned over in his hospital bed.  Problems with low-pressure hydrocephalus (fluid in the brain) resulted in him spending many weeks lying down, attached to a drain and he was unable to move.  But over time, Ethan’s determination took over. A programmable shunt was inserted in his head to manage the hydrocephalus, which allowed the drain to be removed.  He began to sit up and try to move around.  He was able to swallow better and he showed signs of wanting to eat and drink again.

As Ethan continued to improve, he was placed on an international clinical trial for newly diagnosed childhood ependymoma patients. He began chemotherapy in an effort to shrink the remaining brain tumor.  After various complications, and over ten weeks in hospital, Ethan made it home for the first time in March 2012.  He was delighted to be in familiar surroundings.  He recovered brilliantly – he began to crawl around and tried to climb on our furniture every opportunity he could! 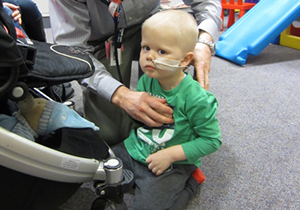 Following chemotherapy, Ethan underwent seven weeks of radiation therapy, in an attempt to eradicate any remaining cancerous cells and reduce the risk of a recurrence. Amazingly, post-treatment MRI scans showed no evidence of tumor!

Sadly, Ethan has been left with palsy on the left side of his face. He is just now starting to learn to eat and drink again due to ongoing problems with swallowing (having received all of his nutrition through nasogastric or nasojejunal tubes). He has had to learn to sit, crawl and walk all over again.  Ethan’s challenges are made all the more difficult because he is non-verbal, and he was recently diagnosed with autism.  Nonetheless, the magnitude of the challenges that Ethan faces on a daily basis is only matched by the courage and spirit with which he faces them.

Ethan now receives ongoing therapy to address his medical issues, and periodic MRI scans to check for recurrences.  Thankfully, all scans to date have been clear. 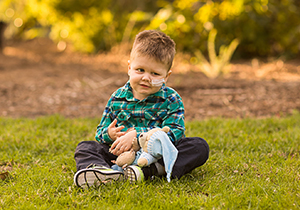 The most important thing for us is to make the most of every day we have together with Ethan.  As parents, the best advice we can give to others with children battling ependymoma is to discard all expectations you might have of your child, appreciate your child for who they are, take nothing for granted, and take heart from small victories.

We believe that something positive can come out of misfortune.  In partnership with the Telethon Institute for Child Health Research, we established the Ethan Davies Scholarship for Brain Cancer Research in Australia. This annual Scholarship supports a researcher in the Telethon Institute’s brain cancer laboratory accelerate the development and introduction of new and improved treatments to prevent and better treat childhood brain cancer, particularly ependymoma. Since May 2012, with the help of our supporters, we have raised approximately $280,000 to fund this important research. 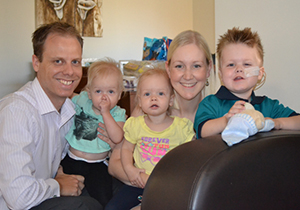 To find out more about Ethan’s Scholarship, visit www.ethandaviesscholarship.com.au.

We are planning on holding a mass butterfly release to recognize CERN Foundation’s organized Ependymoma Awareness Day. The event will be held in Perth, Australia on April 10, 2014 at 1:00-2:00pm. The Lord Mayor of Perth will attend and speak at our event in the heart of the city. We hope to raise awareness and research funding for childhood brain cancer.