Kayla’s Family and Friends Honor Her

As Kayla’s 13th birthday approached on January 28, 2013, aunts Debbie and Julie, struggled with how to both celebrate her life and honor her memory. This would be the first birthday that her parents would have to mark without Kayla, who passed away in 2012 after a five-year long battle with ependymoma. 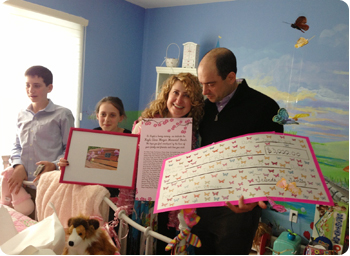 They decided to collect donations for a park bench dedicated in Kayla’s name. With the help of a giving website, they received more than 70 generous donations, which paid for the bench with enough left over to fund a $3,000 contribution to CERN Foundation’s 2013 Ependymoma Awareness Day. With many tears, Kayla’s aunts, Debbie and Julie, ushered her parents, Eric and Laurie Wenger, into a room full of family members and close friends, where they surprised them with the CERN donation check and a photo of the new bench decorated with pink ribbons and butterflies.

Julie said, “The day was filled with love, lots of pink, a good dose of indulgence and what I consider a true reflection of all things Kayla. It was also a reminder of the incredible impact she had on so many people and the continued influence she has in shaping our lives every day.” Kayla’s dad, Eric added that, “Laurie and I were both incredibly surprised and touched by the installation of the bench and the donation to CERN. We were surrounded by those who loved Kayla, which made a hard day more bearable.” 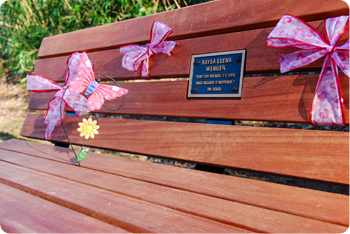 The memorial bench now sits on the Capital Crescent Trail, a trail used by walkers, runners, and bikers with a plaque that reads, “Don’t cry because it’s over, smile because it happened” – Dr. Seuss. The location of the bench was carefully picked to ensure it was lively and action-packed because that is how Kayla lived her life. The check was marked with butterflies to represent the butterflies purchased in Kayla’s memory for the 2013 Ependymoma Awareness Day. Kayla’s father was invited to speak at last year’s event and gave a touching tribute in memory of his daughter.

Speaking in 2012, Eric said “it also helps to know that those who love us continue to support our efforts to end this terrible disease. No other child should be taken by ependymomas – no other family should have to experience this loss.”

The CERN Foundation would like to express our gratitude for the gracious generosity of the Wenger family. Kayla will forever impact the ependymoma community.