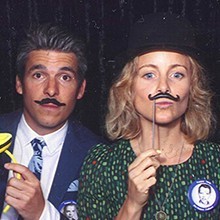 Ependymoma Through The Lens of CERN Filmmakers

For award-winning filmmakers Anthony Mathile and Stacey Lee, telling the story of ependymoma patients and their families is their most rewarding work. But it’s also personal.

In 2003, Anthony’s father, Dallas, was diagnosed with an ependymoma. “There was no information on the disease and nowhere to turn. My family was really in the dark,” Anthony says.

To help prevent another family from feeling alone and uninformed in their ependymoma journey, Anthony got involved with the CERN Foundation by using his storytelling skills as a documentary videographer. Together with Stacey Lee, now his fiancé, their projects for the foundation include producing the People of CERN video series to humanize the experience of ependymoma, filming events to raise awareness and creating informative animations to solicit action.

“Our goal is to rally the ependymoma community around a common experience: the challenge of being diagnosed with a disease people don’t know about,” Stacey says.

Creating the People of CERN

In 2015, Anthony and Stacey were asked to produce a video series that would put a face to the people affected by ependymoma, but it needed to stand out. “Our challenge was to tell an emotional story without just a sad piece of music that pulls at your heart strings,” Anthony says. “We want to tell a more balanced and interesting story.”

The first person they met was 3-year-old Emma, who was diagnosed with an ependymoma at 13 months old. After spending time with Emma and her family, Stacey had an idea: to tell the story through the lens of Emma’s sister, 5-year-old Maci.

As a toddler, Maci’s playground was the hospital. She visited her sister to make her smile, laugh and feel better. It has been two years since Emma’s last treatment and she continues to have clear scans. Maci says when Emma grows up, she’s going to be an angel. (Watch Maci’s Story).

“We plan to creatively approach each story differently because each family has a different experience,” Anthony says. “And we meet and spend time with the family before we even start filming,” Stacey adds.  “We understand that this is a traumatic time in people’s lives, so production is a slow process.”

Through the video series, Anthony and Stacey aim to bring awareness to ependymoma in a new way. They also hope to start a dialogue that will positively impact the community. The next person in the series is a former defense attorney and mother of two, diagnosed shortly after the birth of her second child.

On May 2, 2016, the CERN Foundation and its community gathered in Washington, D.C., for the fifth annual butterfly release in celebration of Ependymoma Awareness Day. Over 700 butterflies were released to honor loved ones with ependymoma, caregivers and to support ependymoma research.

Anthony and Stacey had the honor of capturing the event, which included speeches from a former caregiver, a patient and members of the CERN Foundation.

“The event was absolutely emotional and beautiful,” Stacey says. “We created a summary of the experience that day, and it’s powerful.” (Watch the 2016 CERN Foundation butterfly release).

Anthony and Stacey took on yet another challenge from the CERN Foundation this year. To create what they call “infotainment” for the Risk Project. The project intends to answer the one question that plagues most all patients: Why did this happen to me?

Anthony and Stacey felt like this video series should be more light-hearted, fun and colorful. So instead of live action, they’re using animations to show research data and solicit participation in the research.

“We’ve found from our film interviews that people want to help and be active,” Anthony says. “But they just don’t know how.”

The first animated video in the series is a call-to-action for an online survey as part of the Ependymoma Outcomes Project. The project is in its fourth year and helps researchers learn what life is like for people with ependymoma before, during and after treatment. (Watch the Risk Project).

Anthony stresses that these videos are not just some ad campaign. “People rely on videos for information and storytelling. We’re bringing that to the CERN Foundation, but in a unique way.”

Ongoing Volunteer Service During the Pandemic

The CERN Foundation knew it was critical to continue to host the Ependymoma Awareness Day event despite the challenges Covid-19 presented to the global community. Anthony and Stacey were instrumental in helping make that vision a reality with the virtual 2020 Ependymoma Awareness Day event. The moving virtual event featured voices from all over the world of ependymoma survivors and care partners. Instead of a mass release, butterflies were released at individual homes of speakers and supporters to honor loved ones with ependymoma, caregivers, medical professionals, and to remember loved ones. Donor messages were also handwritten on white paper butterflies and placed in a blooming tree as a visual representation of support from the community. A compilation video was created to summarize the events of the day and can be viewed here.

Additionally, Anthony and Stacey helped produce content for the 2021 Ependymoma Awareness Day virtual event by editing footage from CERN Fellows including Dr. Vijay Ramaswamy and Dr. Claire King to create moving and insightful pieces. The virtual program included educational and awareness content from CERN Advisors and Members, historical clips from previous EAD events, key issues from the ependymoma community, and concluded with a butterfly release. Thousands of people from all over the world viewed and shared the virtual program in an effort to raise awareness about ependymoma. Feedback from the community included:

“I watched and thought - if only THIS is what people would see when they Google 'ependymoma'!!! Such great information!” Beth

“Thank you for such a lovely event. I was in tears throughout the whole thing - just beautiful.” Patti

“My heart was in my throat through the entire event. To see doctors and medical researchers around the world studying ependymoma to better understand it and to look at new therapeutic directions is a huge boost to our hope. Thank you for everything you do – I cannot underscore how fundamentally important it is to our family.” Rachel