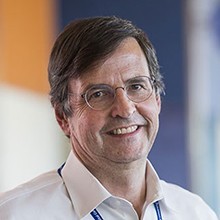 Pediatric neuro-oncologist Nicholas Foreman, M.D., has been researching new therapies for resistant brain tumors in children for over 25 years. But for the past decade, he has uniquely focused his research on immunotherapies for recurring ependymomas, which are associated with poor survival.

Specifically, Dr. Foreman is studying the immunobiology of ependymomas – the biological factors of the disease that drive changes in the immune system.

“There is a misunderstanding of immune biology,” explains Dr. Foreman. “People think you just have to ramp up the immune system [to fight the disease], but in some situations you need to change the immune system because it’s pro-tumor, and make it anti-tumor.”

Two-thirds of childhood ependymomas are located in the posterior fossa and are of two distinct molecular subgroups: Group A and Group B. Dr. Foreman discovered that the immunobiology of Group A was pro-tumor and Group B was anti-tumor, meaning Group A is more aggressive and accounts for worse outcomes and the most deaths. “And almost all children that are very young, under age five, have posterior fossa Group A tumors,” says Dr. Foreman.

These impactful discoveries were the start of Dr. Foreman’s immunobiology research.

Dr. Foreman recently investigated what drives the different immune responses in pediatric ependymomas. The short answer is epigenetics, the modification of genes, which causes a cascade of biological changes. For Group A tumors, silencing the LDOC1 gene releases the protein NF-κB and increases IL-6 gene secretion, driving the immune cells to be pro-tumor. “It’s a complicated cascade, but describes exactly how the tumor changes the immune system,” says Dr. Foreman. The complex process will soon be published in the Journal of Neuro-Oncology.

These results are the basis for Dr. Foremen’s current clinical trial. The first-of-its-kind trial is studying whether an antibody that targets HER2, a gene expressed by ependymoma cells, can change the immune response in Group A tumors to be anti-tumor. He hopes to complete the trial in 18 months and immediately start his next immunotherapy clinical trial, which will use chimeric antigen receptor (CAR) T cell therapy against HER2.

T cells are a type of immune cell. Researchers collect the cells from patients and genetically engineer them to produce CAR receptors. When injected in patients, they home in on the cancer cells and can destroy them.

Dr. Foreman believes the CAR T cell therapy targeted to the ependymoma cells that express HER2 will be the game-changer. He hopes to move this therapy from initially treating recurrent patients to treating newly diagnosed patients to see if the therapy can prevent recurrence of ependymoma.

“The therapy should work by mopping-up the residual cells, or the diseased cells left behind after surgery or radiation,” says Dr. Foreman. His goal is to deliver this therapy in five to seven years to newly diagnosed children to prevent relapse.

“The challenge to the clinical research overall is finding the funding and identifying the right patients,” says Dr. Foreman. “Not to mention, the science can be difficult.” And while he is unique in his current immunobiology research for pediatric ependymomas, he is not working alone. He is able to collaborate with expert biologists and others interested in using CAR T cells against cancer.

“Ependymoma is the third most common type of pediatric brain tumor. But, unlike other common brain tumors, it isn’t sensitive to standard therapies, so outcomes are often worse,” explains Dr. Foreman. “With new research, I hope to change this paradigm.”