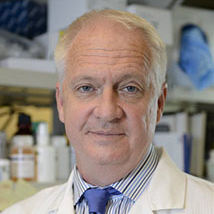 “Sometimes it’s the rare things that teach us about the common ones,” says Dr. Eric Holland, a world-renowned neurosurgeon and brain tumor researcher at the Fred Hutchinson Cancer Research Center (the Hutch) and University of Washington (UW) Medicine.

Like many physician-scientists that practice in the neuro-oncology field, Dr. Holland often treats and studies the most common malignant brain tumor, glioblastoma. However, he understands the importance of serving patients with rare central nervous system tumors, like ependymoma, and believes there’s also a lot he and his colleagues can learn from investigating these other cancers.

“[Supratentorial ependymoma] is a tumor that seems to arise from one event rather than many events, so we can learn what is really needed for tumor formation, maintenance, and what a therapeutic response would really look like,” says Dr. Holland.

Funding from the CERN Foundation in 2014, as well as participation in CERN scientific meetings, has helped propel this leading expert on his journey to better understand what drives ependymoma and how it could be treated.

“I was delighted when I was asked by him to consider being part of CERN,” recalls Dr. Holland. “When I saw his data at a CERN meeting on the gene fusion, I knew that this was likely the answer to the question of what actually causes [supratentorial ependymoma].”

The “gene fusion” Dr. Holland is referring to is a mistake that occurs when pieces of DNA in ependymal cells become rearranged so that a gene known as RELA ends up accidentally fused to another gene called C11orf95. The resulting RELA-C110rf95 fusion is commonly found in supratentorial ependymoma tumors. In fact, it’s estimated that more than 70 percent of supratentorial ependymomas contain RELA-C110rf95 fusions, a group of tumors now referred to as ST-EPN-RELA. Unfortunately, the prognosis for patients with this subtype of ependymomas is poor, with five-year survival rates less than 30 percent. Patients with supratentorial ependymomas without this fusion typically have significantly better outcomes. Dr. Gilbertson’s lab first discovered this fusion’s significance in ependymoma, and a 2018 Robert Connor Dawes Scientific Fellowship award to lab member, Claire King, Ph.D., from CERN has funded further research on RELA-C110rf95.

Interested in learning more about how the RELA-C110rf95 fusion drives supratentorial ependymomas, and what treatments might be able to target this mistake, Dr. Holland knew that he needed better tools to study the fusion in an environment that mimics how these tumors behave in humans. Armed with a $250,000 research grant from CERN, Dr. Holland, along with Dr. Gilbertson and other collaborators, set about creating a laboratory model of RELA-C110rf95 fusion harboring supratentorial ependymoma, an arduous but critical step in the journey toward developing new, better treatments for ependymomas.

In 2018, Dr. Holland, Dr. Gilbertson, and others published information about their new model and what they’d learned from it in the leading scientific journal Cell Reports. The findings detailed by this paper were of major importance to the field of ependymoma research. Writing in an accompanying commentary in the same issue of Cell Reports, leading pediatric brain tumor researchers, Drs. Kristian Pajtler and Stefan Pfister, who weren’t involved in the study, noted this significance. “The absence of genetically accurate mouse models for this disease has hampered development of targeted therapeutics approaches,” Drs. Pfister and Pajtler wrote, continuing later, “A [new] RELA-fusion-induced mouse ependymoma model complemented by in-depth molecular analyses of resulting tumors could further enhance meaningful preclinical testing of upcoming or repurposed compounds to tackle ST-EPN-RELA.”

This point about the models facilitating future drug development is crucial, as Drs. Holland and Gilbertson’s research has also shown that the RELA-C110rf95 fusion, alone, is sufficient to cause ST-EPN-REAL tumors — unlike many other cancers, which are the result of multiple “driver mutations.” This makes the fusion, and the subsequent changes it wreaks in a tumor, very attractive targets for potential new treatments. That is, since RELA-C110rf95 is the lone driver of tumor growth, shutting down its effects could be all that’s needed to halt this cancer.

Now, Dr. Holland and Dr. Gilbertson are teaming up yet again — this time equipped with a prestigious grant from the National Institutes of Health (NIH) called a “U54,” as well as even more expert collaborators. Unlike its smaller, traditional cousin, the R01 (the standard NIH grant mechanism), U54 grants provide major funding to foster multidisciplinary and collaborative research. Their U54 will provide Drs. Holland and Gilbertson $6 million for a “full range of research and development” activities to identify drugs that can target the functions of the RELA-C110rf95 gene fusion.

The availability of the U54 grant, itself, is the result of the advocacy efforts of the National Brain Tumor Society (NBTS) and others who helped launch then-Vice President Biden’s “Cancer Moonshot” in 2016. NBTS’s chief executive officer, David Arons, served as a member of the Blue Ribbon Panel of experts that advised and made recommendations for the Moonshot’s implementation and Danielle Leach, NBTS chief of community and government relations, served on the Moonshot’s pediatric working group. One such recommendation was for an initiative to “Intensify Research on the Major Drivers of Childhood Cancers.” It was through this initiative that the NIH and National Cancer Institute developed a “Fusion Oncoproteins in Childhood Cancers” consortium and made the U54 grants available. Drs. Holland and Gilbertson and their team are the only group focusing on pediatric brain tumors to receive funding within this consortium. Congress has continued to fully fund the Moonshot and its projects each year since its inception, thanks in large part to the ongoing advocacy work of NBTS and other groups, including CERN Foundation volunteers who join with NBTS at the annual Head to the Hill advocacy day each year.

“We got to talking about applying for a grant like this because it seemed an obvious extension of what each of us had been doing,” says Dr. Holland. “This kind of work is best done as a group of experts amplifying their skills by working together. We constructed this grant putting some of the best people together to collaborate.”

Joining Drs. Holland and Gilbertson in this effort will be Drs. William Weiss, an expert in brain cancer biology, and Kevan Shokat, a skilled medicinal chemist with a reputation for creative approaches to drug discovery and development, both from the University of California, San Francisco.

Together, the group will combine its wisdom and talents to confront the RELA-C110rf95 fusion head-on. While the nature of the fusion’s singular importance in ST-EPN-RELA tumors presents a major opportunity for new treatments, getting to that point will still be a significant challenge. Yet, the team is hopeful they can make substantial progress toward a new treatment with the U54, progress that began with a philanthropic grant from the CERN Foundation.

CERN will continue to update the ependymoma community on important advancements that come from the U54 grant. This is a remarkable stride for the brain tumor community, demonstrating the importance of private philanthropy, public policy advocacy, government research funding, and team science converging to create a major opportunity for brain tumor researchers and paving the way for new treatment possibilities in the future.